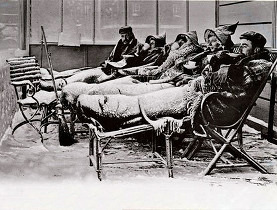 The dark side of Davos’s magic mountain
A surreal mix of Nazis, American pilots, refugees and
Swiss crossed paths on Davos’s snowy streets and in its
sanatoriums in the 1930s and 40s.
In her intimate political documentary, “A l’ombre de la montagne”, Swiss filmmaker Danielle Jaeggi explores the mythical alpine resort, its clinics and this obscure period of Swiss history via her tubercular father’s letters and archive footage. “For a long time I wanted to make a film about Swiss sanatoriums as my father had TB,” Jaeggi told swissinfo.ch. “He never talked about it as it was a secret. I later rediscovered his letters but for a long time I didn’t dare touch them as they delved into my parent’s intimacy.” When she was a little girl Jaeggi used to watch her father disappear for long stays in the mountains without knowing where he was going or why. Sixty years on the Swiss film director retraced his journey from Lausanne through the picture-postcard Alps to Davos, the mountain resort in eastern Switzerland, which has exerted a pull on writers, business leaders and people of poor health. François Jaeggi, a Lausanne medical student, stayed on and off at the Schatzalp sanatorium in Davos from 1931 to 1950 suffering from TB. In his poignant letters to his wife, Agnès, a Jewish-Hungarian also studying medicine at Lausanne, François hides the gravity of his illness, but hints at his mental anguish far from his wife and daughter. In the film he recounts the strange therapies and unusual atmosphere in the luxurious hospice where time stood still, full of “Russian princesses” and “German businessmen”. Bored by his monotonous daily routine, François re-reads Thomas Mann’s “Magic Mountain”, whose main character also stays at a sanatorium in Davos. Fresh air and flatulent cows
From the middle of the 18th century, Davos became a popular destination for both the rich and the sick. Doctors believed its high valley microclimate was ideal for combating the “bad breath of the cities” and helping cure illnesses, in particular TB. Photographs and archive footage show lines of smiling patients wrapped in blankets sunning themselves on sanatorium terraces in the cool air. The long outdoor siestas were just part of a grueling 7am-10pm daily regime, which also included mountain hikes, frequent sumptuous meals and litres of milk and wine, to rid themselves of the scourge. Another local therapy for TB sufferers involved staying the night in a stable to benefit from the ammonium produced by flatulent cows. “Doctors didn’t know how to treat the illness, which they could only contain,” said Jaeggi. “There was a symbolic side to the whole thing, a kind of pureness: fresh alpine air, red meat, red wine and white milk.” François also discovered the darker sides to life in the hospice, like the “dead who are evacuated at night by underground tunnels and toboggans”. Rise of Nazis
But her father’s letters also described his concern over the rise of Nazism in the resort. For many years Davos was a favourite destination for Germans seeking a high-altitude health cure. After 1933 the National Socialist German Workers’ Party took control of the German expatriate community in Davos, which represented a quarter of the population, and its Swiss supporters. The party invested heavily in local property and bought numerous sanatoriums. In the resort, signs for the health centres stood alongside those of the local branch of the Nazi party, run by Wilhelm Gustloff, a former employee at the Swiss Meteorological Institute. “The Swiss just let it all happen and no one is taking the warnings seriously,” wrote François. But Jaeggi’s father was not the only person worried about the Nazi presence. In 1936 a young Jewish medical student, David Frankfurter, assassinated Gustloff, turning the Nazi official into a martyr. “The tension here is extreme,” wrote François. “That Gustloff was a swine, but what happened was a big political error.” Open doors
During the Second World War, Switzerland maintained good relations with Germany and Italy. It was “open doors” for Germans to cross the border, as they only needed a medical certificate from a German doctor, but it was a completely different treatment for Jews, said Jaeggi. In one letter François worries about the impact of the Swiss authorities’ request to the Nazis for passports belonging to Germans of Jewish origin to be stamped with the letter “J”. “Have you renewed your resident permit?” he asks Agnès. “We should not remain passive in the face of such events.” And in 1941 he writes: “When I think that Switzerland proclaims it’s neutral”. Strange mix
Towards the end of the war, the resort attracted a surreal mix of Nazi officials and 300-400 American pilots, who had crash-landed in Switzerland. In the film we see footage of them skiing on the nearby slopes. Once an armistice was signed, the Davos Nazis used their network of contacts to keep a low profile in Switzerland, however. Refugees, including concentration camp victims, also came to Davos towards the end of the war. Local magistrate Moses Silberroth tried to welcome groups of Jewish children but the project was blocked by the local authorities, who preferred to see the former Nazi HQ building in Davos quickly converted into a hotel rather than house children waiting to go to Palestine. But Jaeggi’s documentary is not just a window on this dark period of Swiss history. The documentary is also an intimate search for her father and comment on the clinic regime. At the end of the film, she symbolically smashes a small sealed vial of Davos air that her

father had given her. We then see jars of bacteria, which led to the discovery of penicillin that eventually cured her father and caused the downfall of the sanatoriums. “I wanted to show that the pureness of the air was a myth and people should be careful about myths,” said Jaeggi. Simon Bradley, swissinfo.ch Davos in the 1930s-40s
Nazis, American pilots, refugees and sick patients in Davos in the 1930s and 40s. Old sanatorium gets makeover
Glorious future for grand old hotel, Schatzalp. Danielle Jaeggi
Danielle Jaeggi was born in Lausanne on February 24, 1945 to a Swiss father and Hungarian mother. After studying music at the Geneva Conservatory, she left Switzerland in 1970 to study filmmaking at the IDHEC film school in Paris. She has made a number of documentaries and films, including “La fille de Prague” (1978). “L'arche de Nam June” (1980), “Tout près de la frontier” (1982), “Losing touch” (1992), “Dans le champ des étoiles (2000). She teaches at Paris University VIII. Her film is currently being shown in French-speaking Switzerland (Sainte Croix on December 11, Martigny on December 12) and in German-speaking Switzerland in Spring 2010. Tarnished wartime record
The surrender of Nazi Germany ended six years of horror for Europe, and was a huge relief for neutral Switzerland. The country had spent the war trying to avoid antagonising the Nazis, and had lived in constant fear of invasion. In the 1990s, uncomfortable revelations surfaced about Swiss banks handling assets looted by the Nazis and refusing to release details of dormant accounts held by Holocaust victims. The scandals prompted the government to set up an independent commission of experts, led by Swiss historian Jean-François Bergier, to investigate Switzerland's wartime past. The final report, published in 2002, shattered many myths about the country's wartime history. Bergier's commission found that government and industry had cooperated with the Nazis, and that Switzerland had turned away thousands of Jewish refugees at its borders. The report also destroyed the idea that Switzerland's defences had saved it from Nazi invasion, and highlighted the uneasy relationship the Swiss had had with Germany. In the five-year probe into Switzerland's wartime past presented in 2002, the Independent Commission of Experts (ICE) condemned government policy towards the Nazis and the treatment of refugees. Border guards turned away at least 24,000 refugees during the Second World War, most of them Jews. Yet Switzerland did provide sanctuary to some 300,000 people during the war years. “L’ombre de la montagne” official website (French) (http://www.alombredelamontagne.ch/drupal/index.php) swissworld culture (http://www.swissworld.org/en/culture/) http://www.swissinfo.ch/eng/index.html?cid=7881108

Microsoft word - the vitality of prayer.doc

At the Sunshine Cathedral MCC on 02/19/06 Johnny, a very bright 5 year old, told his daddy he'd like to have a baby brother and, along with his request, offered to do whatever he could to help. His dad, a very bright 35 year old, paused for a moment and then replied, " I'll tell you what, Johnny, if you pray every day for two months for a baby brother, I guarantee that God will give you one!&

SPECTROPHOTOMETER Application note: A09-010A The quantitative determination of caffeine in beverages and soft drinks using UV wavelength spectroscopy Introduction Caffeine is a naturally occurring alkaloid which is found in the leaves, seeds or fruits of over 63 solutions with chlorinated solvents such as plants species worldwide. The most common dichlormethane and chlorofo