INTRODUCTION TO
MEDICINAL CHEMISTRY
The subject of medicinal chemistry explains the design and production of compounds that can be used for the prevention, treatment or cure of human and animal diseases. Medicinal chemistry includes the study of already existing drugs, of their biological properties and their structure activity relationships. Medicinal chemistry was defined by IUPAC specified commission as, “it concerns the discovery, the development, the identification and the interpretation of the mode of action of biologically active compounds at the molecular level”. Medicinal chemistry covers the following stages : (i) In the first stage new active substances or drugs are identified and prepared from natural sources, organic chemical reactions or biotechnological processes. They are known as lead molecules. (ii) The second stage is optimization of lead structure to improve potency, selectivity (iii) Third stage is development stage involves optimization of synthetic route for bulk production and modification of pharmacokinetic and pharmaceutical properties of active substance to render it chemically useful. Medicinal chemistry is the application of chemical research techniques to the synthesis of pharmaceuticals. During the early stages of medicinal chemistry development, scientists were primarily concerned with the isolation of medicinal agents found in plants. Today, scientists in this field are also equally concerned with the creation of new synthetic drug compounds. Medicinal chemistry is almost always geared towards drug discovery and development. Medicinal chemists apply their chemistry training to the process of synthesizing new pharmaceuticals. They also work on improving the process by which other pharmaceuticals are made. Most chemists work with a team of scientists from different disciplines, including biologists, toxicologists, pharmacologists, theoretical chemists, microbiologists, and biopharmacists. Together this team uses sophisticated analytical techniques to synthesize and test new drug products and to develop the most cost-effective and environmentally friendly means of production.

2 | Medicinal Chemistry
The focus on development of new synthetic drug compounds has resulted in the incorporation of many other disciplines, such as biochemistry and molecular biology into medicinal chemistry. These areas include biology, computer-aided design, X-ray crystallography, metabolism and pharmacokinetics, legal and regulatory affairs, clinical, franchise management, pharmaceutics, and process research chemistry. Chronology of Drug Introductions
8000 BC : Prehistoric medicine
It is difficult to imagine anything other than modern medical treatments but for thousands of years humans have become ill and for the same amount of time people have tried to cure them. Our ideas about medicines in prehistoric times come from archaeologists who have excavated and explored ancient sites. Their findings reveal a very different Trepanning: an ancient human
Cave paintings and symbolic artefacts found by archaeologists suggest the earliest humans believed in spirits and supernatural forces. One form of primitive surgery seems quite shocking. Ancient skulls have been found with a hole bored into them. This appears to have been a deliberate operation and carried out whilst the person was still alive. We can only speculate as to the reason for this operation, called trepanning, but it may have been to allow the evil spirits to leave a sick person. 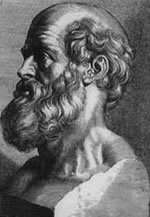 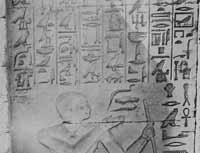 Introduction to Medicinal Chemistry | 3
2000 BC : Egyptian medicines
The ancient Egyptians built pyramids to bury their Pharaohs and worshipped gods who ruled every aspect of their lives. The goddess Sekhmet was believed to cause or cure diseases and priests played a large part in Egyptian medicine. Archaelogists have found documents, written on a type of paper called papyrus, that describe medical techniques similar to those used today. The Egyptians used compression on a wound to stop bleeding and had specialists in obstetrics and gynecology who were the forerunners Egyptian hieroglyphs: like this
Their pharmacists prepared prescriptions of ointments, lotions, inhalers and pills by processing plant materials that were used to treat specific illnesses. Records show that they used many preparations including opium, cannabis, linseed oil and senna. Many modern drugs have originated from the study and isolation of active ingredients from plants with healing properties. 450 BC to 300 AD: Greeks and Romans
Greece was home to one of the earliest civilizations. Writing, mathematics, philosophy and the arts all flourished. The Greeks believed in many different gods but they also tried to understand their world in a much more scientific way. Possibly the most famous name in medicine belongs to the Greek philosopher Hippocrates. He is seen as the father of modern medicine and gives his name to the hippocratic oath that doctors take. The Romans realized that there was a link between dirt and disease. To improve public health, they built aqueducts to supply clean drinking water and sewers to remove wastes safely. Improved personal hygiene Hippocrates: famed for the
helped to reduce disease and Roman baths were places to socialize as well as stay clean. 500 - 1400 AD: The Middle Ages
The fall of the Roman Empire meant that many of their public hygiene practices were soon lost. The middle ages in Europe saw most people without access to clean drinking water, regular bathing or a sewage system. This meant that health conditions were often worse than during the Roman occupation of earlier centuries. Most people were farmers and food was not as plentiful as today. Starvation and disease were common. 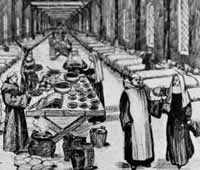 4 | Medicinal Chemistry
dominated by religion. Sickness was believed to be a punishment from God for sins committed and the only way to cure someone was to pray for their forgiveness. Doctors in the middle ages were usually priests or other religious scholars. Hospitals often sprang up in monasteries and other religious establishments. The patients were given food and comforted by religious nursing staff but little else was done to cure their illness. Traditional cures, using herbal remedies and potions were seen as witchcraft and outlawed by the church. Laws stated that only A medieval hospital: Patients were given
trained and registered people could practice medicine. Schools and universities began to educate wealthy individuals in religion, the arts, law and medicine. Generally men, and occasionally a few women, were trained and allowed to become physicians. As universities developed, more and more came from a non-religious background and eventually it was not necessary to be a cleric to practice medicine. Surgery was a crude practice during the middle ages but operations such as amputations, setting broken bones, replacing dislocations and binding wounds were relatively common. Opium was sometimes used as an anesthetic while wounds were cleaned with wine to prevent infections. During the middle ages, the only treatments were superstitious remedies, prayer, herbal medicines and recipes for clearing the air of miasma or poison. The plague was considered to be a punishment from God and so public health was not considered to be important. 700 - 1500 AD: Arabic medicines
For many centuries after the fall of the Roman Empire, the Arabic world was the centre of scientific and medical knowledge. Texts from Greece and Rome were translated into Arabic and studied by Islamic scholars. They developed and refined Hippocrate's theories and Islamic physicians began to use the regulation of diet, exercise and the prescription of medicinal herbs in the treatment of their patients. Arabic pharmacists became skilled in the formulation of medicines from plants and minerals. Even though they did not know about microbes, they used alcohol to clean wounds which healed better and did not become scholar Ibn Sina (or
Records show that Arabic doctors performed many different surgical operations including the removal of 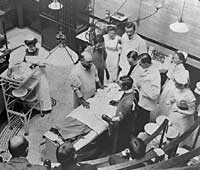