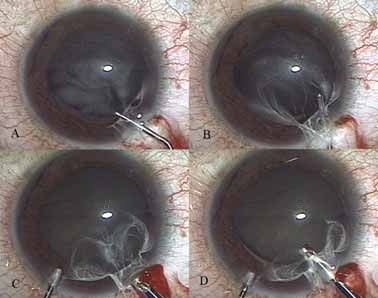 Anterior
Vitrectomy
The art of visualizing the vitreous.
BY SCOTT E. BURK, MD, PHD; ANDREA P. DA MATA , MD; ROBERT H. OSHER, MD;
AND ROBERT J. CIONNI, MD
Vitreous gel, transparent by design, is virtually the agent. On the contrary, eyes receiving intracameral invisible under the operating microscope.
triamcinolone have a quieter postoperative course versus Furthermore, it is particularly unwelcome in those in which the agent is not used.
makes surgery more difficult and is associatedwith a variety of serious intraoperative andpostoperative complications such as a droppedlens fragment, corneal edema, cystoid macularedema, retinal detachment, and endophthalmi-tis.1-14 Fortunately, meticulous vitreous clean-up can reduce the incidence of many vision-threatening complications associated with vit-reous loss.9 Until recently, however, surgeonshad only indirect intraoperative clues to deter-mine if vitreous gel were present in the anteriorchamber and, if so, to what extent. Triamcinolone acetonide (Kenalog; Bristol- Myers Squibb Company, New York, NY) hasproven quite useful for visualizing vitreous inthe anterior chamber15 and has become a rou-tine part of our practice for complicatedcataracts with large zonular dialyses. To date,we have performed more than 200 cases of tri- Figure 1. The surgeon injects triamcinolone acetonide into the prolapsed
amcinolone-assisted anterior vitrectomy and vitreous (A and B) and then performs an anterior vitrectomy (C and D).
have not seen a complication attributable to Note the vitreous present in the wound at the time of injection.
APRIL 2005 I CATARACT & REFRACTIVE SURGERY TODAY I 61

P R E PA R AT I O N
A LT E R N AT I V E S
We continue to prepare triamcinolone as originally Realizing that the vitreous gel will capture and hold described15 and remove the preservative by a sterile nearly any particulate matter, some groups are evaluat- capture-and-wash technique. Our decision is based on ing alternative techniques of vitreous identification. The a lack of data regarding the intracameral effects of ben- most notable is 11-deoxycortisol, a steroid precursor zyl alcohol, the preservative in Kenalog. Clearly, howev- er, our original washing technique is a bit tedious, par- Nonetheless, we prefer triamcinolone acetonide because ticularly when the encounter with vitreous is unexpect- it is readily available, is nontoxic,17-19 and has a 25-year ed or the OR staff is unfamiliar with the technique. track record for intraocular use since it was first described It is therefore not surprising that one of the most in 1980 by Tano et al.20 In addition, one should not under- common questions regarding intracameral triamcino- estimate the role of intracameral triamcinolone in stabiliz- lone is, “Can the preparation be simplified?” There are ing the blood-aqueous barrier and minimizing inflamma- actually several options (and wide variation among sur- tion on postoperative day one in complicated anterior geons) that range from using the agent directly out of the bottle to simple dilution. Others fill a syringe withtriamcinolone, stand it inverted until the particles set- Q U E S T I O N S
tle, express the vehicle, and resuspend the triamci- To date, two questions about triamcinolone-assisted nolone particles in the desired volume of BSS. In addi- vitrectomy are unresolved. As mentioned earlier, the tion, compounding pharmacies sell preservative-free first regards the method of preparation and the effects triamcinolone, but it has a limited shelf life. of the benzyl alcohol preservative. The use of preserva-tive-free or washed triamcinolone makes intuitive sense, T E C H N I Q U E
but we are unaware of any evidence suggesting that the When asked the best way to use triamcinolone, the removal of the benzyl alcohol preservative is helpful or answer is not to lose vitreous in the first place. The next best answer is to get lots of practice. Neither reply The second question relates to the probability of is practical for most surgeons, who instead must gain steroid-induced glaucoma. It is well known that our vit- insight from the experience of others. Here at the Cin- reoretinal colleagues observe increased IOP after the cinnati Eye Institute, we typically withdraw 0.2mL of depot injection of an intraocular steroid. Indeed, the 40mg/mL triamcinolone acetonide, then wash and amount of steroid deposited correlates with the per- resuspend the agent in 2.0mL of BSS (10X dilution).
centage of patients experiencing elevated IOPs and with Much higher concentrations tend to leave too much unbound triamcinolone in the anterior chamber, Although it is certainly possible that an eye will devel- whereas a larger volume of a lower concentration of op glaucoma after undergoing triamcinolone-assisted triamcinolone tends to distribute the particles more anterior vitrectomy, we have not observed this complica- tion. Furthermore, the risk of steroid-induced glaucoma Ideally, one injects the agent directly within the sub- seems to be minimal when the surgeon uses a small stance of the vitreous to obtain maximum visualiza- amount of triamcinolone and then removes most of it tion. Dusting the surface of the gel works, but only along with the vitreous gel that was identified. In sum- until one has removed the surface, at which point rein- mary, we have found triamcinolone acetonide to be safe jection is necessary. Dr. Burk likes to swirl a little triam- and quite useful for identifying and removing vitreous. ■ cinolone around the anterior chamber to get an over-view of the situation. He then buries the cannula’s tip Scott E. Burk, MD, PhD, is Clinical Ophthalmolo- within the gel and makes a very controlled injection. It gist at the Cincinnati Eye Institute and Volunteer is important to remember that, if the vitreous is near Faculty for the Department of Ophthalmology, the wound and fluid comes out upon the injection, so University of Cincinnati College of Medicine. He will vitreous. Inserting the cannula through the para- states that he holds no financial interest in any centesis often avoids such reflux. Vitrectomy should be product or company mentioned herein. Dr. Burk may be performed with a high cutting rate, a low aspiration rate, and separate irrigation. Although not always needed, a pars plana approach can be quite helpful, Robert J. Cionni, MD, is Medical Director of particularly for vitreous at the site of the corneal inci- the Cincinnati Eye Institute. He states that he holds no financial interest in any product or 62 I CATARACT & REFRACTIVE SURGERY TODAY I APRIL 2005

Vision of a perfect flap may overlooksafety advantages of microkeratomesover the IntraLase FS device company mentioned herein. Dr. Cionni may be reached at (513) 984-5133; [email protected] Andrea P. Da Mata, MD, is Research Ophthal- mologist at the Cincinnati Eye Institute. She states Although there is more than one way that she holds no financial interest in any prod- to create a flap, some surgeons may be uct or company mentioned herein. Dr. Da Mata swayed by the perceived advantages of may be reached at (513) 984-5133; using the IntraLase femtoseconddevice instead of the microkeratome to solve a problem that, in essence, has Robert H. Osher, MD, is a professor in the Department of Ophthalmology at the Uni- versity of Cincinnati College of Medicine and is physicians should be aware of some Medical Director Emeritus at the Cincinnati Eye Robert K. Maloney, MD important safety concerns associated Institute. Dr. Osher is also the founder and edi- tor of the Video Journal of Cataract and Refractive Sur-gery. He states that he holds no financial interest in any Though rare, flap complications can occur with both methods. product or company mentioned herein. Dr. Osher may be It really comes down to the type of problem a surgeon would reached at (513) 984-5133; [email protected] prefer to deal with. My practice receives a lot of referrals forcomplications, so I have the opportunity to see many of the 1. Shah DP, Krishnan AA, Albanis CV, et al. Visual acuity outcomes following vitreous problems associated with both microkeratomes and the loss in glaucoma and diabetic patients. Eye. 2002;16:271-274.
2. Tan JH, Karwatowski WS. Phacoemulsification cataract surgery and unplanned ante- IntraLase device. In my experience, microkeratomes are more rior vitrectomy—is it bad news? Eye. 2002;16:117-120.
likely to cause buttonholes, whereas the IntraLase device 3. Ionides A, Minassian D, Tuft S. Visual outcome following posterior capsule rupture appears to be more frequently associated with flap tears. during cataract surgery. Br J Ophthalmol. 2001;85:222-224.
Referring surgeons have also mentioned loss of suction with the 4. Chitkara DK, Smerdon DL. Risk factors, complications, and results in extracapsularcataract extraction. J Cataract Refract Surg. 1997;23:570-574.
IntraLase device – a complication caused by the time required 5. Berrod JP, Sautiere B, Rozot P, Raspiller A. Retinal detachment after cataract surgery.
to make the flap. Some surgeons – I being one of them – find it Int Ophthalmol. 1996-1997;20:301-308.
easier to manage buttonhole flaps, and are therefore better off 6. Frost NA, Sparrow JM, Strong NP, Rosenthal AR. Vitreous loss in planned extracap- using the microkeratome. For doctors who are more comfort- sular cataract extraction does lead to a poorer visual outcome. Eye. 1995;9(pt 4):446-451.
able coping with flap tears, the IntraLase device may be a more 7. Banker AS, Freeman WR. Retinal detachment. Ophthalmol Clin North Am. 2001;14: 695-704.
8. Drolsum L, Haaskjold E. Causes of decreased visual acuity after cataract extraction.
While the IntraLase is widely marketed as a better way to create J Cataract Refract Surg. 1995;21:59-63.
flaps, there is data that suggests that its complication rates are 9. Spigelman AV, Lindstrom RL, Nichols BD, Lindquist TD. Visual results following vit-reous loss and primary lens implantation. J Cataract Refract Surg. 1989;15:201-204.
similar to the microkeratome, and that in fact, it can present 10. Balent A, Civerchia LL, Mohamadi P. Visual outcome of cataract extraction and lens additional, unique problems. Visual recovery with Intralase implantation complicated by vitreous loss. J Cataract Refract Surg. 1988;14:158-160.
appears to take longer, with referring IntraLase surgeons telling 11. Berger BB, Zweig KO, Peyman GA. Vitreous loss managed by anterior vitrectomy.
me of 20/20 to 20/30 acuities day one post op versus the 20/15, Long-term follow-up of 59 cases. Arch Ophthalmol. 1980;98:1245-1247.
12. Kanski JJ, Ramsay JH. Vitrectomy techniques in the management of complications 20/20 I typically see in my keratome patients. Currently, there is in cataract surgery. Trans Ophthalmol Soc UK. 1980;100(pt 1):216-218. no substantive scientific or clinical proof that IntraLase offers 13. Mamo JG. Late effects of vitreous loss. Ann Ophthalmol. 1974;6:935-941.
advantages over the microkeratome, and it will take time to 14. Ruiz RS, Teeters VW. The vitreous wick syndrome. A late complication following confirm longer-term visual results. cataract extraction. Am J Ophthalmol. 1970;70:483-490.
15. Burk SE, Da Mata AP, Snyder ME, et al. Visualizing vitreous using Kenalog suspen-sion. J Cataract Refract Surg. 2003;29:645-651.
A new area of concern involves track-related iridocyclitis and 16. Kaji Y, Hiraoka T, Okamoto F, et al. Visualizing the vitreous body in the anterior scleritis (TRISC), a condition that can surface with the IntraLase chamber using 11-deoxycortisol after posterior capsule rupture in an animal model.
device. This syndrome can be extremely debilitating – forcing patients to wear sunglasses indoors for months and endure 17. McCuen BW 2nd, Bessler M, Tano Y, et al. The lack of toxicity of intravitreallyadministered triamcinolone acetonide. Am J Ophthalmol. 1981;91:785-788.
aggressive steroid therapy. Topical corticosteroids can elevate 18. Hida T, Chandler D, Arena JE, Machemer R. Experimental and clinical observations IOP and induce fluid accumulation in the interface. This may of the intraocular toxicity of commercial corticosteroid preparations. Am J Ophthalmol.
lead to falsely low IOP readings, which could potentially result 19. Young S, Larkin G, Branley M, Lightman S. Safety and efficacy of intravitreal triam-cinolone for cystoid macular oedema in uveitis. Clin Experiment Ophthalmol. 2001;29:2-6.
When considering a flap-creation method, physicians should 20. Tano Y, Chandler D, Machemer R. Treatment of intraocular proliferation with intrav- take into account all of these factors. itreal injection of triamcinolone acetonide. Am J Ophthalmol. 1980;90:810-816.

Stewart was once known by a different name. See the next page for his actual racing history. His great-great-great-grandsire was War Admiral, the horsemade famous in our time by the book and movie “Seabiscuit.”War Admiral’s sire was Man O’War, arguably the greatestracehorse ever. Man O’War lost only once, at Saratoga, second to a horse named Upset. Some interesting tidbits about th