Biochemical and Biophysical Research Communications 291, 1089 –1094 (2002)
doi:10.1006/bbrc.2002.6541, available online at http://www.idealibrary.com on Reduction of Toxic Metabolite Formationof Acetaminophen Eszter Hazai, La´szlo´ Vereczkey, and Katalin Monostory1Chemical Research Center, Hungarian Academy of Sciences, P.O. Box 17, H-1525 Budapest, Hungary diphosphoglucuronic acid and 3Ј-phosphoadenosine-5Ј- Acetaminophen is a widely used over-the-counter
drug that causes severe hepatic damage upon over-
water-soluble conjugates (4). About 3% of ingested dose. Cytochrome P450-dependent oxidation of acet-
acetaminophen is bioactivated by cytochrome P450 en- aminophen results in the formation of the toxic
zymes (CYP1A2, CYP2A6, CYP2E1 and CYP3A4 (4)).
N-acetyl-p-benzoquinone-imine (NAPQI). Inhibition of
Cytochrome P450-dependent oxidation results in the cytochrome P450 enzymes responsible for NAPQI for-
formation of the nontoxic 3-hydroxy-acetaminophen mation might be useful— besides N-acetylcysteine
and the highly reactive N-acetyl-pbenzoquinone-imine treatment—in managing acetaminophen overdose. In-
(NAPQI). NAPQI, which is formed only in a trace vestigations were carried out using human liver mi-
amount upon intake of therapeutic doses, can be de- crosomes to test whether selective inhibition of cyto-
toxified by conjugation with glutathione (Fig. 1). Upon chrome P450s reduces NAPQI formation. Selective
intake of an overdose, the capacity of the organism—to inhibition of CYP3A4 and CYP1A2 did not reduce,
cope with acetaminophen— overloads (the cofactors of whereas the inhibition of CYP2A6 and CYP2E1 signif-
conjugation enzymes as well as glutathione are de- icantly decreased NAPQI formation. Furthermore, se-
pleted) (5). The toxic effect of an overdose results in lective CYP2E1 inhibitors that are used in human
covalent modification of proteins as well as impairment therapy were tested for their inhibitory effect on
of cellular capacity to keep essential thiol groups in NAPQI formation. 4-Methylpyrazole, disulfiram, and
diethyl-dithiocarbamate were the most potent inhibi-
tors with IC
values of 50 ␮M, 8 ␮M, and 33 ␮M, re-
Inhibition of cytochrome P450 enzyme(s) responsible spectively. Although cimetidin is used in the therapy
for the formation of NAPQI might be one of the useful of acetaminophen overdose as an inhibitor of cy-
tools besides N-acetylcysteine treatment in managing tochrome P450, it is not able to reduce NAPQI
acetaminophen overdose. In this way the organism formation.
may gain time to produce cofactors that are necessary 2002 Elsevier Science (USA)
Key Words: acetaminophen; N-acetyl-p-benzoqui-
for the detoxifying pathways. Although in manage- none-imine;
inhibition;
ment strategy of acetaminophen poisoning cimetidine ylpyrazole; disulfiram; diethyl-dithiocarbamate; hu-
is often used as a cytochrome P450-inhibitor to reduce man microsomes; cimetidine.
NAPQI formation, its efficacy is rather questionable (6,7). The aim of our investigation was i) to determine theenzymes responsible for NAPQI formation at lower andhigher doses; ii) to test whether cimetidine efficiently Acetaminophen is one of the most widely used over- inhibits NAPQI formation; iii) to inhibit the formation the-counter drugs with analgesic and antipyretic prop- of NAPQI by using selective cytochrome P450 enzyme erties. Although regarded to be safe at therapeutic doses, acetaminophen is known to cause acute hepaticcentrilobular necrosis in humans when consumed in large doses (1, 2). Acetaminophen overdose results inmore calls to poison centers in the United States than 14C-acetaminophen labelled on the methyl group was overdose with any other pharmacologic substance (3).
synthetized at Chemical Research Center of the Hungarian Academy In biotransformation reactions in human about 90% of of Sciences (Budapest, Hungary). The synthesis was carried out asfollows: 14C-acetic acid was reacted with N-hydroxy-succinimide. The ingested acetaminophen is linked with uridine-5Ј- product was reacted with p-aminophenol. After purification proce-dures, the specific activity of the endproduct was 1.95*1012 Bq ⅐ molϪ1. N-acetyl-p-benzoquinone-imine standard was purchased ϩ36013257548. E-mail: [email protected]
from Sigma (Deisenhofen, Germany). D-Glucose-6-phosphate and 0006-291X/02 $35.00 2002 Elsevier Science (USA)All rights reserved. 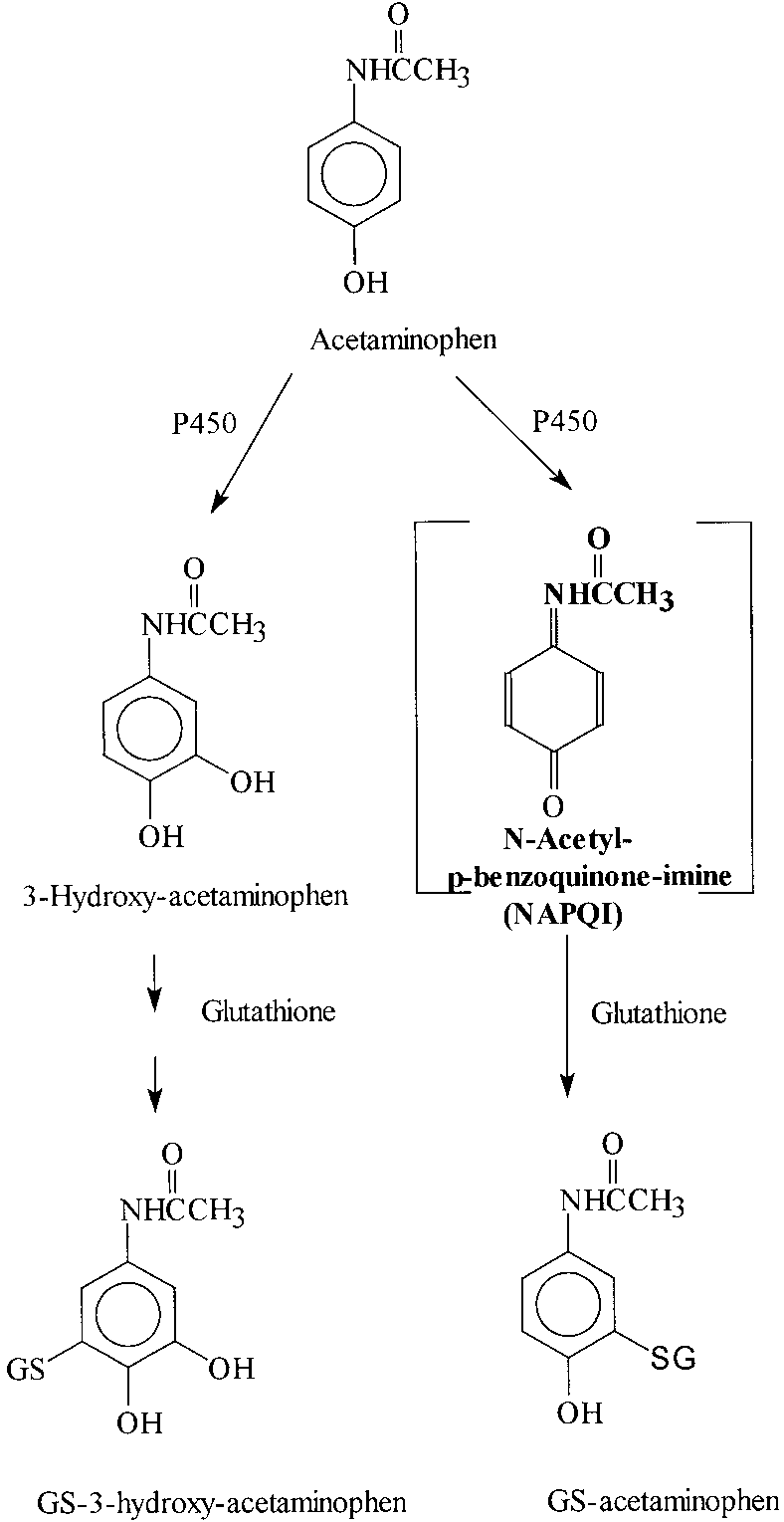 BIOCHEMICAL AND BIOPHYSICAL RESEARCH COMMUNICATIONS acetaminophen. The incubation mixture contained 5 mg human livermicrosomal protein, selected concentrations of 14C-acetaminophen,10 mM glutathione in 0.1 M Tris-HCl buffer (pH 7.4). The reactionwas initiated by the addition of NADPH-generating system (1 mMNADPH, 5 mM MgCl2, 10 mM glucose-6-phosphate and 2 units/ml ofglucose-6-phosphate dehydrogenase). The final incubation volumewas 500 ␮l. The assay was conducted at 37°C for 40 min, and wasterminated by the addition of 50 ␮l 33% sulfosalicilic acid. NAPQIformation was linear up to 50 min. The mixture was centrifuged thenthe pH of the supernatant was adjusted to 5.0 (by the addition of 2NNaOH) and the sample was analyzed for the formation of NAPQI.
Since NAPQI is a highly reactive molecule, it also binds to proteinspresent in the incubation mixture, which makes the detection ofNAPQI impossible. Therefore, NAPQI was detected as its glutathi-one conjugate, 3-(glutathione-S-yl)acetaminophen (GS-acetamino-phen). GS-acetaminophen is immediately formed in the presence ofreduced glutathione and NAPQI (14).
The incubation process was the same as de- scribed above. Acetaminophen was used at 0.25 mM concentration.
The following specific cytochrome P450 enzyme inhibitors were used:␣-naphtoflavone (100 ␮M, for CYP1A2), 8-methoxypsoralen (10 ␮M,for CYP2A6), diethyl-dithiocarbamate (100 ␮M, for CYP2E1), trole-andomycin (200 ␮M, for CYP3A4). The following published cyto-chrome P450 inhibitors at 100 ␮M concentration were tested forNAPQI production: cimetidine, chlorpromazine, diclofenac, fluphen-azine, thioridazine, isoniazid, diallyl sulfide, 4-methyl pyrazole, di-sulfiram.
A new chromatographic method has been de- veloped in our laboratory for the detection of GS-acetaminophen.
Compounds were separated on a Merck Lichrospher RP-18 column 5␮m (250 mm*4 mm) column (Darmstadt, Germany), protected by acartridge guard column (30*4 mm) packed with identical solid phase.
The mobile phase consisted of 40 mM NH4-acetate (pH ϭ 4.8):methanol ϭ 87:13 (v/v) at a flow rate of 1 mL ⅐ minϪ1. The compoundswere detected both by their UV absorption at 250 nm and accordingto 14C activity.
conjugate and selective cytochrome P450 enzyme activities (phenac-etin O-deethylation of CYP1A2, coumarin 7-hydroxylation of Cytochrome P450-dependent metabolism of acetamino- CYP2A6, chlorzoxazone 6-hydroxylation of CYP2E1, nifedipine oxi- dation of CYP3A4) for each preparation of liver microsomes werecompared by simple linear regression analysis for each pair of data.
D-glucose-6-phosphate dehydrogenase (E.C. 1.1.1.49.) were obtainedfrom Calbiochem (La Jolla, CA, USA). 5-Sulfosalicylic acid, reduced glutathione and methanol of HPLC grade were obtained from Merck(Darmstadt, Germany). All other chemicals were from Reanal(Budapest, Hungary).
Correlation of NAPQI formation and specific enzyme Preparation of human liver microsomes. kidney transplant donors were from Transplantation and Surgery nors were characterized with substrates selective for Clinic of Semmelweis University (Budapest, Hungary). Permission different cytochrome P450s that are responsible for the of Local Research Ethics Committee was obtained for the use of oxidative metabolism of majority of drugs. Results of human liver tissues. Samples of human liver microsomes were pre- pared as described in (8). Microsomal protein concentration was The formation of NAPQI (assayed as its glutathione determined by the method of Lowry (9), with bovine serum albuminas standard.
conjugate, 3-(glutathione-S-yl)acetaminophen, GS-acet-aminophen) was investigated i) at low (0.05 mM) and termine specific enzyme activities of CYP1A2 (10), CYP2A6 (11), ii) at high (0.25 mM) acetaminophen concentrations CYP2E1 (12) and CYP3A4 (13). The incubation mixtures contained (Table 1). The structure of GS-acetaminophen was human liver microsomal protein, a NADPH-generating system (1 also confirmed by LC/MS study with authentic stan- mM NADPH, 10 mM glucose 6-phosphate, 5 mM MgCl2 and 2 dard (Hazai et al., 2001 submitted for publication in units/ml glucose 6-phosphate dehydrogenase); and various selective substrates for cytochrome P450 forms (0.2 mM phenacetin forCYP1A2, 0.2 mM coumarin for CYP2A6, 0.5 mM chlorzoxazone for At lower acetaminophen concentration no correla- CYP2E1, 0.2 mM nifedipine for CYP3A4).
tion was found between NAPQI formation and the spe- Biotransformation of acetaminophen. cific cytochrome P450 activities (CYP1A2, CYP2A6, NAPQI were identified at 0.05 mM and 0.25 mM concentrations of CYP2E1 and CYP3A4 activities) (Table 1). At 0.25 mM 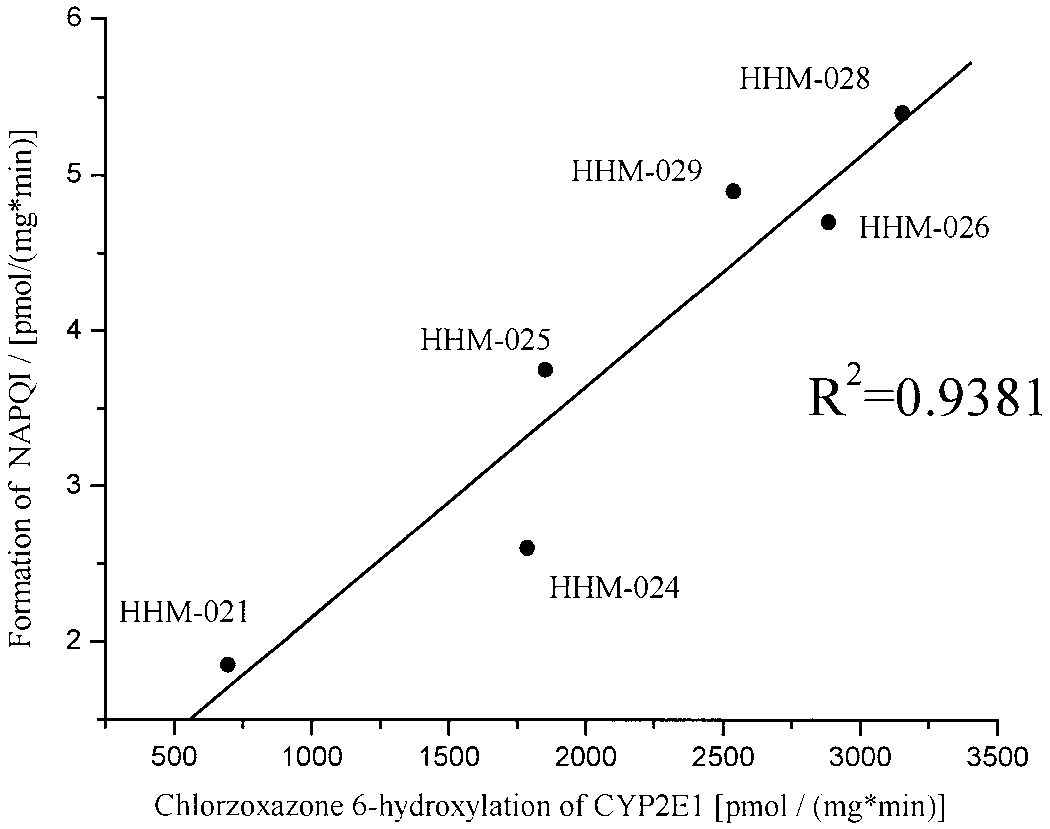 BIOCHEMICAL AND BIOPHYSICAL RESEARCH COMMUNICATIONS Characterization of Human Liver Microsomes (HHM) for Selective Substrates of Cytochrome P450 Enzymes (Phenacetin O-Deethylation of CYP1A2, Coumarin 7-Hydroxylation of CYP2A6, Chlorzoxazone 6-Hydroxylation of CYP2E1, NifedipineOxidation of CYP3A4), and for the Formation of GS-Acetaminophen Conjugate at Different Acetaminophen Concentrations Note. The values are expressed as pmol product/(mg microsomal protein*min). The correlation of the production of GS-acetaminophen conjugate and selective cytochrome P450 enzyme activities are presented. Each pair of data was compared by simple linear regression. R2values of the linear regression analysis are presented for each specific enzyme activities at two acetaminophen concentrations.
concentration there was a marked correlation (with an further evidence for the participation of cytochrome R2 value of 0.9381) between the formation of NAPQI P450 forms in the formation of NAPQI. Selective inhi- and the specific enzyme activity of CYP2E1 (Table 1, bition of CYP3A4 and CYP1A2 did not reduce the Fig. 2). However, no correlation was found between the amount of NAPQI, whereas the inhibition of CYP2A6 formation of NAPQI and other specific cytochrome and CYP2E1 resulted in a marked decrease of NAPQI P450 enzyme activities (CYP1A2, CYP2A6, and Furthermore, it has been studied if known CYP2E1 and CYP2A6 inhibitors, which can be administered to bition studies were also carried out in order to provide humans, are able to reduce the formation of NAPQI at0.25 mM acetaminophen concentration. The followinginhibitors of CYP2E1 and/or CYP2A6 were subject toour investigation: chlorpromazine, diclofenac, fluphen-azine, thioridazine, isoniazid, diallyl sulfide, 4-methylpyrazole, disulfiram and its metabolite, diethyl-dithiocarbamate.
carbamate (at 100 ␮M concentration) reduced NAPQIformation to 7 Ϯ 1% and 23 Ϯ 13%, respectively (Fig.
4). 4-Methyl pyrazole (at 100 ␮M concentration) de-creased NAPQI formation to 35 Ϯ 1%. Isoniazid anddiallyl sulfide showed a modest inhibitory effect on theformation of NAPQI (to 74 Ϯ 5% and 45 Ϯ 2%, respec-tively) (Fig. 4). The use of 100 ␮M cimetidine, chlor-promazine, diclofenac, fluphenazine and thioridazinedid not reduce the formation of NAPQI (Fig. 4). How-ever, these substances listed above were considered tobe CYP2E1 inhibitors (15).
The inhibitory effect at different inhibitor concentra- tions was studied with the most potent inhibitors in Formation of NAPQI as the function of CYP2E1 activity at 0.25 mM acetaminophen concentration. HHM means samples of human microsomes. Specific CYP2E1 enzyme activity was measured ␮M for disulfiram, 33 ␮M for diethyl-dithio- with chlorzoxazone 6-hydroxylase reaction.
carbamate and 50 ␮M for 4-methyl pyrazole (Fig. 5). 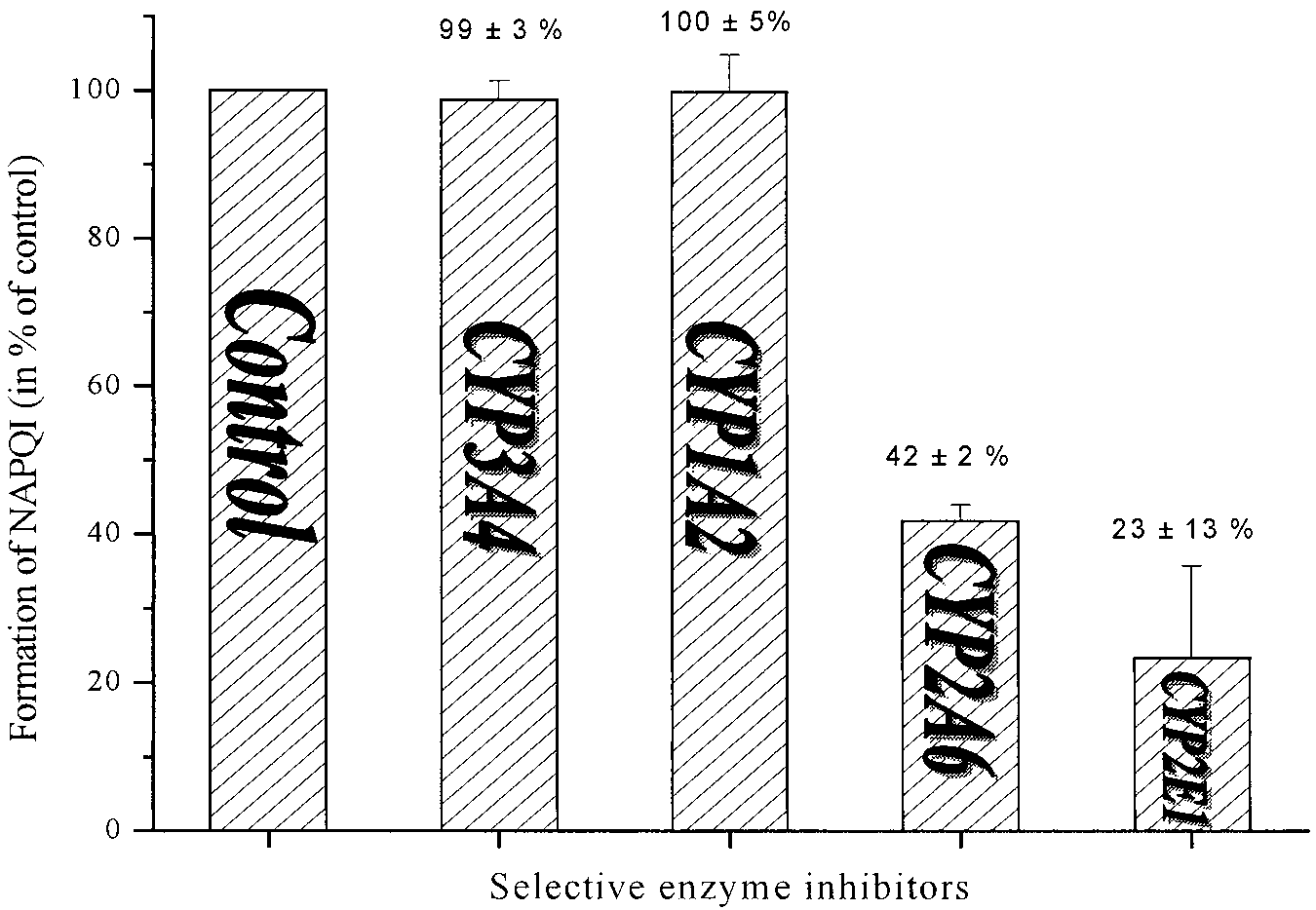 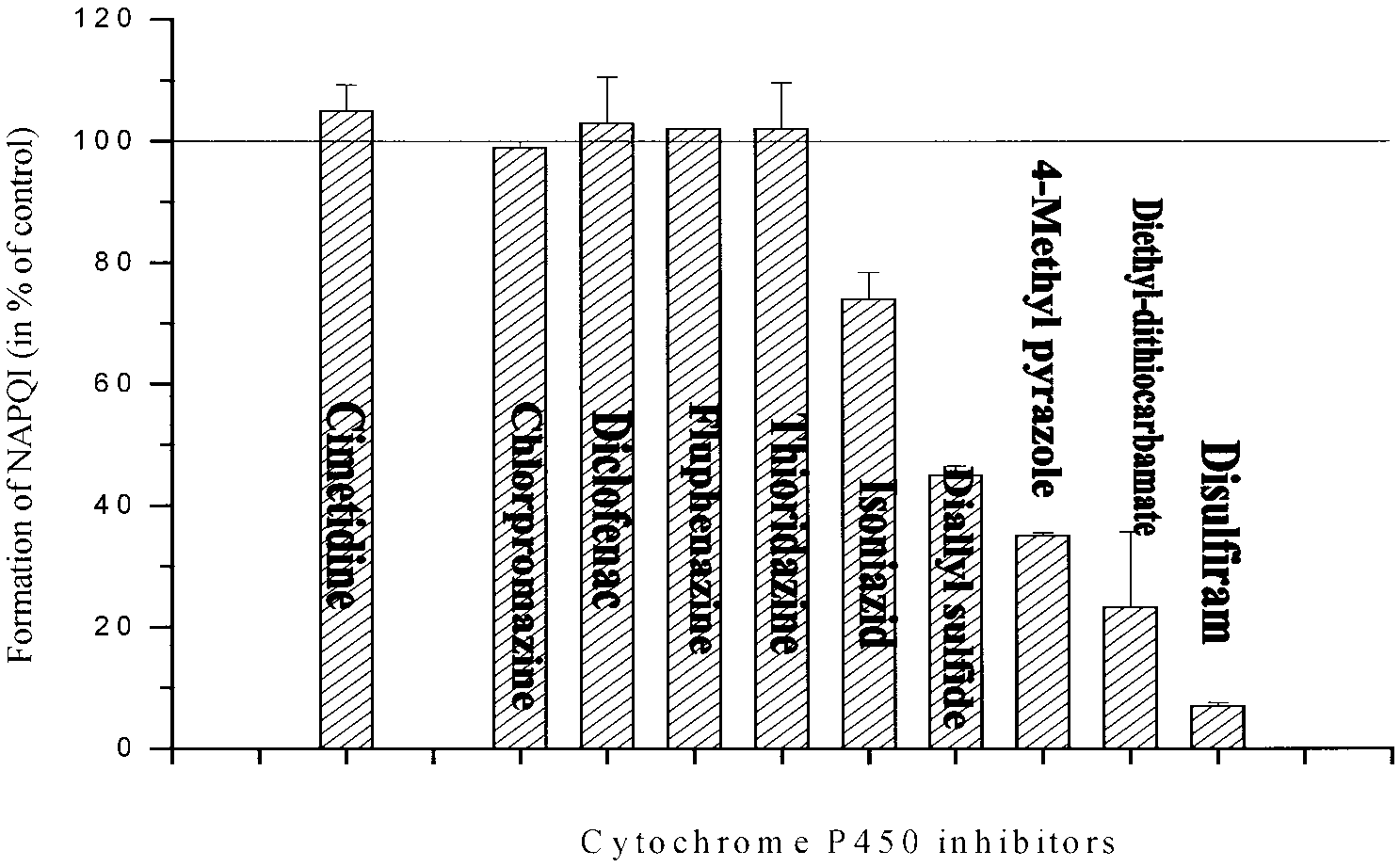 BIOCHEMICAL AND BIOPHYSICAL RESEARCH COMMUNICATIONS Formation of NAPQI in the presence of specific cytochrome P450 inhibitors. Control means the microsomal activity in the absence of inhibitors. The following specific inhibitors were used: troleandomycin (200 ␮M, CYP3A4); ␣-naphtoflavone (100 ␮M, CYP1A2);8-methoxypsoralen (10 ␮M, CYP2A6) diethyl-dithiocarbamate (100 ␮M, CYP2E1).
There are controversial reports on the role of differ- Several forms of cytochrome P450 in humans, in- CYP2E1, CYP3A4) in NAPQI formation at higher dose.
cluding 1A2, 2A6, 2E1, 3A4 have been shown to cata- All of the cytochrome P450 forms listed above have lyze the oxidation of acetaminophen to NAPQI (5).
been reported to contribute significantly to acetamino- CYP3A4 was suggested to play an appreciable role at phen toxicity (5, 17–19). However, studies using lower doses (16). Our study demonstrated that at low CYP1A2 null mice did not confirm the role of CYP1A2 concentration there is no enzyme primarily responsible in acetaminophen toxicity (20). Our correlation study confirmed the role of CYP2E1 in NAPQI formation at The effect of cytochrome P450 inhibitors on the formation of NAPQI. All inhibitors were used at 100 ␮M concentration. 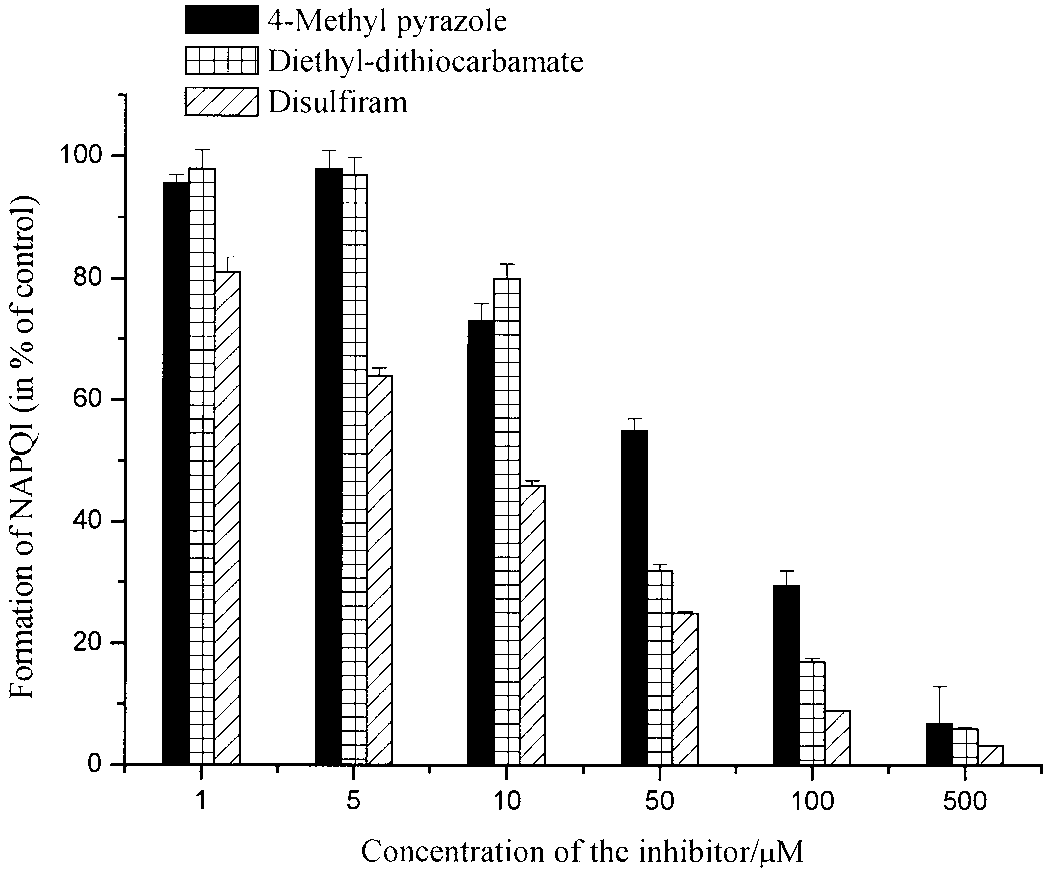 INFORMED CONSENT FOR LASER IN-SITU KERATOMILEUSIS (LASIK) FOR THE CORRECTION OF MYOPIA (NEARSIGHTEDNESS), FARSIGHTEDNESS (HYPEROPIA), ASTIGMATISM, OR MIXED ASTIGMATISM Introduction This information is being provided to you so that you can make an informed decision about the use of adevice known as a microkeratome, combined with the use of a device known as an excimer laser, to reshape