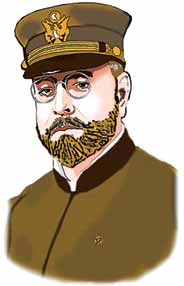 Name________________________________________________________Date_____________________________________ a
S
u Biography
The son of a trombonist, John Philip Sousa (1854–1932) was born with perfect pitch and So mastered the violin, piano, and various wind instruments at a young age. He was enrolled as an apprentice musician in the United States Marine Band when he was only 13. By age 20, ip he was working as a professional violinist and conductor in Philadelphia, where he also began composing and arranging for popular musicals, such as the HMS Pinafore. In 1880, he was invited iL to be the director of the United States Marine Band, which he transformed into the best band in h the United States. In 1892, he created his own band, called Sousa’s Band, changed the reception of band music worldwide. This very successful band toured North America and Europe for p nearly forty years, performing upbeat American march music. Sousa’s Band continued until Known as “The March King,” Sousa composed 135 marches for band while conducting the Jo United States Marine Band and then Sousa’s Band. His marches have exciting melodies and patriotic power. His early marches have a distinctive military feel, such as “Semper Fidelis”, which is now the official march of the United States Marine Corps. Other marches have an energetic swing and lend themselves to dancing, such as “The Washington Post”, which was used for dancing the two-step. Sousa’s simple melodies and harmonies and quickstep march style have made his marches popular. Sousa also composed band showpieces, such as fantasies and humoresques, and his compositions continue to be performed by bands throughout the world.
Apply Your Knowledge!
Write your answers on the back or on a separate march – a musical genre with a strong, regular rhythm, originally written for military bands and, later, 1) At what age did Sousa join the United States Marine quickstep march – a march to a fast tempo, usually in 24 or 2) Why did Sousa’s Band have such an impact on band humoresques – a short , humorous piece of music 3) What is the official march of the United States 4) Identify three characteristics of the style of Sousa’s  Sousa’s “Stars and Stripes Forever” was chosen as the official 5) Listen to a recording of a march by Sousa. Can you hear  In nearly 40 years of existence (1892-1932), Sousa’s Band played over 15,200 concerts worldwide.
 Sousa invented an instrument called the Sousaphone in the Play a march by John Philip Sousa on page 32 of Tradition of
1890s. This tuba encircles the player so that it can easily be Excellence, Book 1.
1854 Sousa is born
1881 Artist Pablo
1914 World War I
1932 Sousa dies
1860 Abraham Lincoln
1899 Freud publishes The
1928 Alexander
Worksheet written by Laurel Plapp, PhD, author and editor. 2010 Kjos Music Press. This page authorized for duplication.