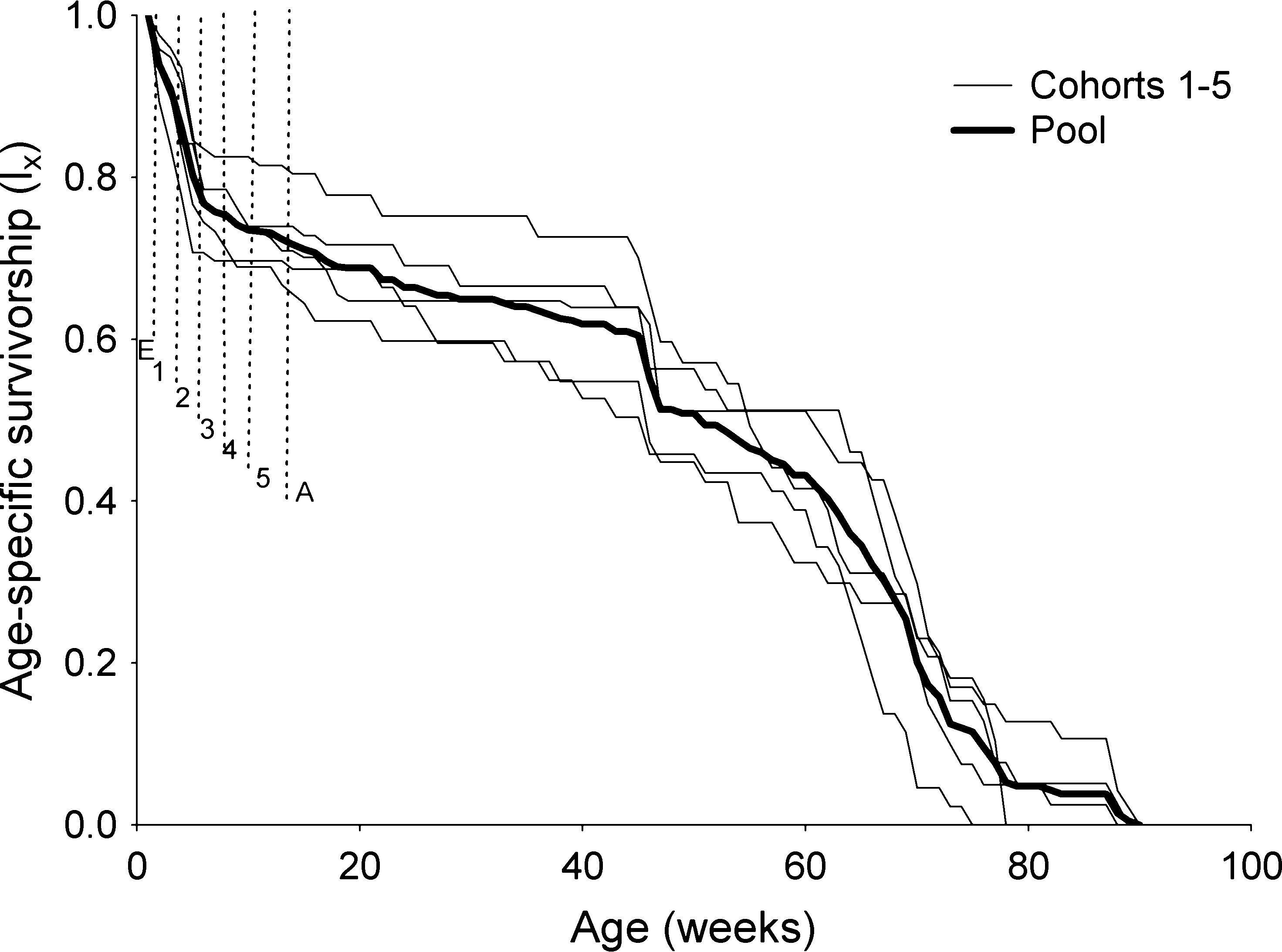 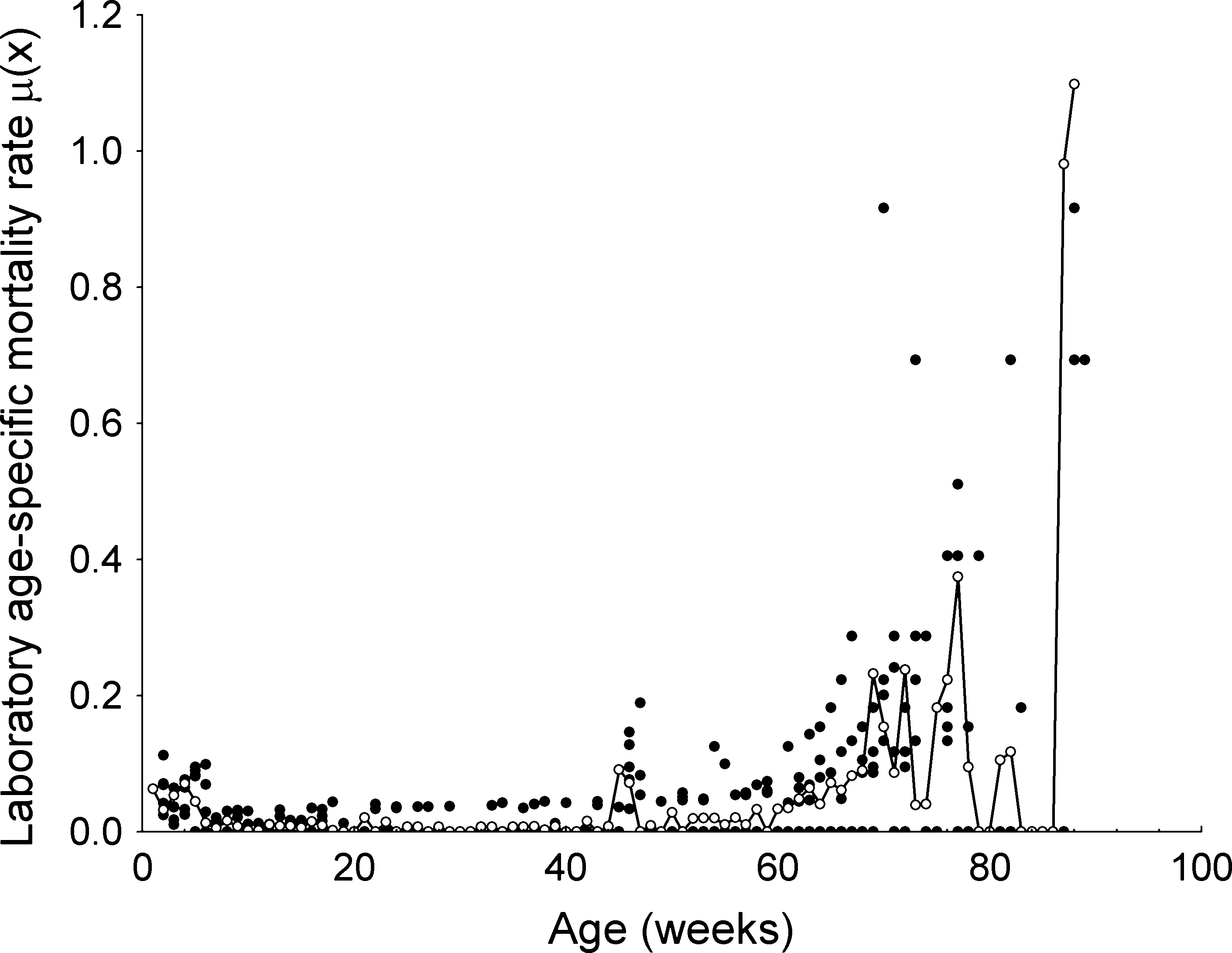 used goodness-of-fit indicators) represents the ‘informa-tion content’ of a given set of parameter estimates (Burn-ham & Anderson, 2002), and it is independent of themagnitude of the data points and of the number of obser-vations. It is calculated as: where Yobsi and Ycalci are the observed and predicted mor-tality rates for the ith observation, ‘p’ is the number ofparameters, and ‘n’ the number of observations. The smal-ler the value of the AIC, the more appropriate the model is.
Figure 1 Age-specific survival (lx) for each cohort of Rhodnius After converting the cohort age-specific survival (l neglectus and the pool of the five cohorts. Vertical dashed lines indicate the average periods of immature development. E, eggs; x and l(x), and despite the peaks of mortality in later ages 1–5, instars 1–5; A, female adults.
not being synchronized, the differences between theage-specific mortality rate l(x) among the five cohorts ofR. neglectus are not statistically significant (Table 1),indicating that the five cohorts may be pooled.
The age-specific female survival (lx) values for each cohort as well as the pool of the five cohorts are presentedin Figure 1. There is a sharp decline in survival in the firstdevelopmental stages (egg, and instars 1 and 2), then thedecline stabilizes until approximately the age of 45 weeks(about 30 weeks of adult female’s age) when another sharpdecline is observed; after age 45 there is a progressivedecline in survival. Figure 2 shows the weekly evolution ofthe age-specific mortality rate l(x) for the individualcohorts and for the pool among cohorts.
Some of the results of the fitting of the smoothed and non-smoothed data to the models are shown in Figure 3and Table 2. The Weibull model is not shown graphicallybecause it had a statistically non-significant fit to one of its Figure 2 Age-specific mortality rate [l(x)] patterns of each parameters. Figure 3 shows the predictions of the remain- cohort of Rhodnius neglectus (black dots) and the pool of the fivecohorts (white dots and solid line). The individual cohorts were ing five models (Gompertz, exponential, DeMoivre, Gavri- not identified separately to facilitate visibility.
lovs, and logistic) with observed pooled laboratory data of Table 1 Friedman ANOVA and Kendall coefficient of concor- the age-specific mortality rate l(x) of R. neglectus. The dance to test the differences in the weekly mortality rates [l(x)] parameter values of those five age-specific mortality rate sequence among the five cohorts of Rhodnius neglectus models tested are shown in Table 2 for the raw data andthe KZA smoothing. Figure 4 shows the maximum effort of egg laying. The quadratic fit for fecundity, given by the equation y = -0.0085x2 + 0.7386x - 5.4479 (r = 0.908), is shown only to ease visualization of the peak of the repro- ductive effort of R. neglectus females. The method for calculating fecundity (eggs ⁄ female ⁄ week) is given in Rabi- novich (1972). It is striking how the peak of reproductive ANOVA v2 = 5.902, d.f. = 4, P = 0.21; n = 88.
effort of R. neglectus coincides with the second early peak Coefficient of concordance = 0.0168, average rank r = 0.00547. 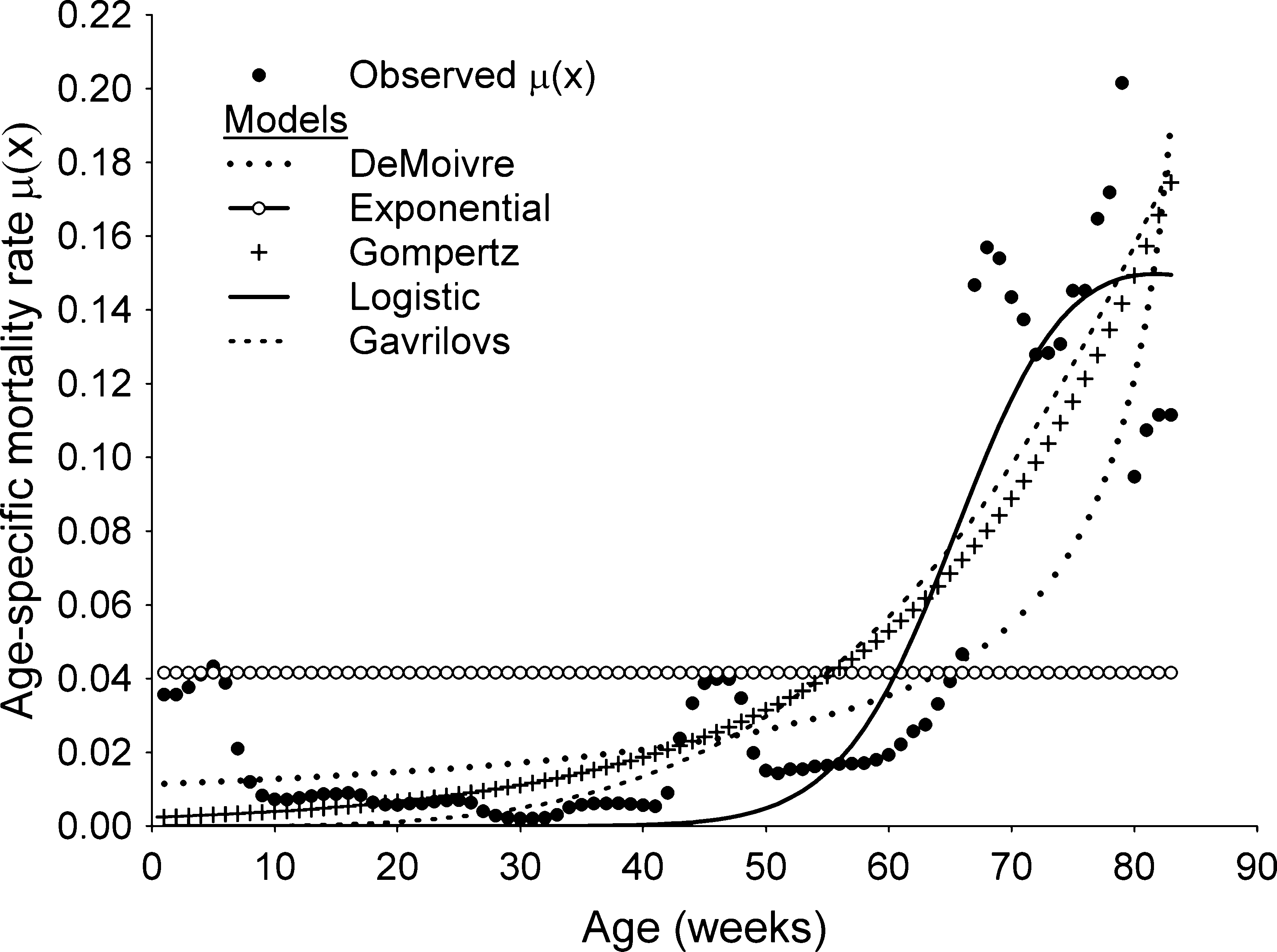 In recent years, some striking lack of fit to the Gompertzmodel has been found in large cohorts of experimentalanimals, primarily insects (Partridge & Mangel, 1999). Theresults of our study show weak evidence for late-age mor-tality deceleration in R. neglectus, in contrast to patternsreported for several Diptera, including the fruitfly Dro-sophila melanogaster Meigen (Curtsinger et al., 1992;Pletcher & Curtsinger, 1998), the medfly Ceratitis capitata(Wiedemann) (Carey et al., 1992, 1998), the mexfly Ana-strepha ludens (Lo¨w) (Carey et al., 2005), and the mosquitoAedes aegypti (L.) (Styer et al., 2007). Rhodnius neglectusage-specific mortality pattern seems to be more similar tothat reported for other kissing bugs such as: R. prolixus Figure 3 Age-specific mortality rate l(x) of observed laboratorydata (as pool of five cohorts) of Rhodnius neglectus and the pre- (Chaves et al., 2004a), R. robustus (Chaves et al., 2004b), dictions of the DeMoivre, exponential, Gompertz, logistic, and the milkweed bug, Oncopeltus fasciatus (Dallas) (Dingle, Gavrilovs models, for the smoothed data applied to l(x).
1966), the cotton stainer, Dysdercus fasciatus Signoret(Dingle, 1966), and the bruchid beetle Callosobruchusmaculatus (Fabricius) (Tatar et al., 1993). This result is To determine the model that represents best the age- consistent with the equilibrium predictions of the antago- specific mortality rate data of R. neglectus, the results of the nistic pleiotropy and mutation accumulation models of application of the Akaike model selection criterion to the senescence (decline in physiological functioning with age; seven mortality rate models are shown in Table 3 for the Abrams & Ludwig, 1995). These models are known as the KZA smoothed l(x) data. From the models that con- ‘disposable soma’ theory for the evolution of senescence formed significantly to the data (the Weibull and GM (Kirkwood & Rose, 1991). This theory states that senes- models did not have a significant fit), the logistic and the cence arises from an optimal balancing of resources Gompertz conformed best, and DeMoivre and exponential between reproduction and somatic repair. For instance, the worst. Similar results (not shown) were obtained with model simulation showed that only when reproductive output gradually approaches, but never reaches, a maxi-mum value as the amount of diverted resources increases,senescence is consistent with the Gompertz model(Abrams & Ludwig, 1995).
Table 2 Parameter values of the five age-specific mortality rate [l(x)] models (the Weibull and Gompertz-Makeham models were notincluded because their fit to the laboratory data was not statistically significant) ‘p’ is the number of parameters of each model. In brackets are the 95% confidence intervals; intervals that do not contain zero are statistic-ally significant with P<0.05, and have been presented graphically in Figure 3. KZA refers to the Kolmogorov–Zurbenko adaptive filtersmoothing method. The models are presented in increasing order of their number of parameters. 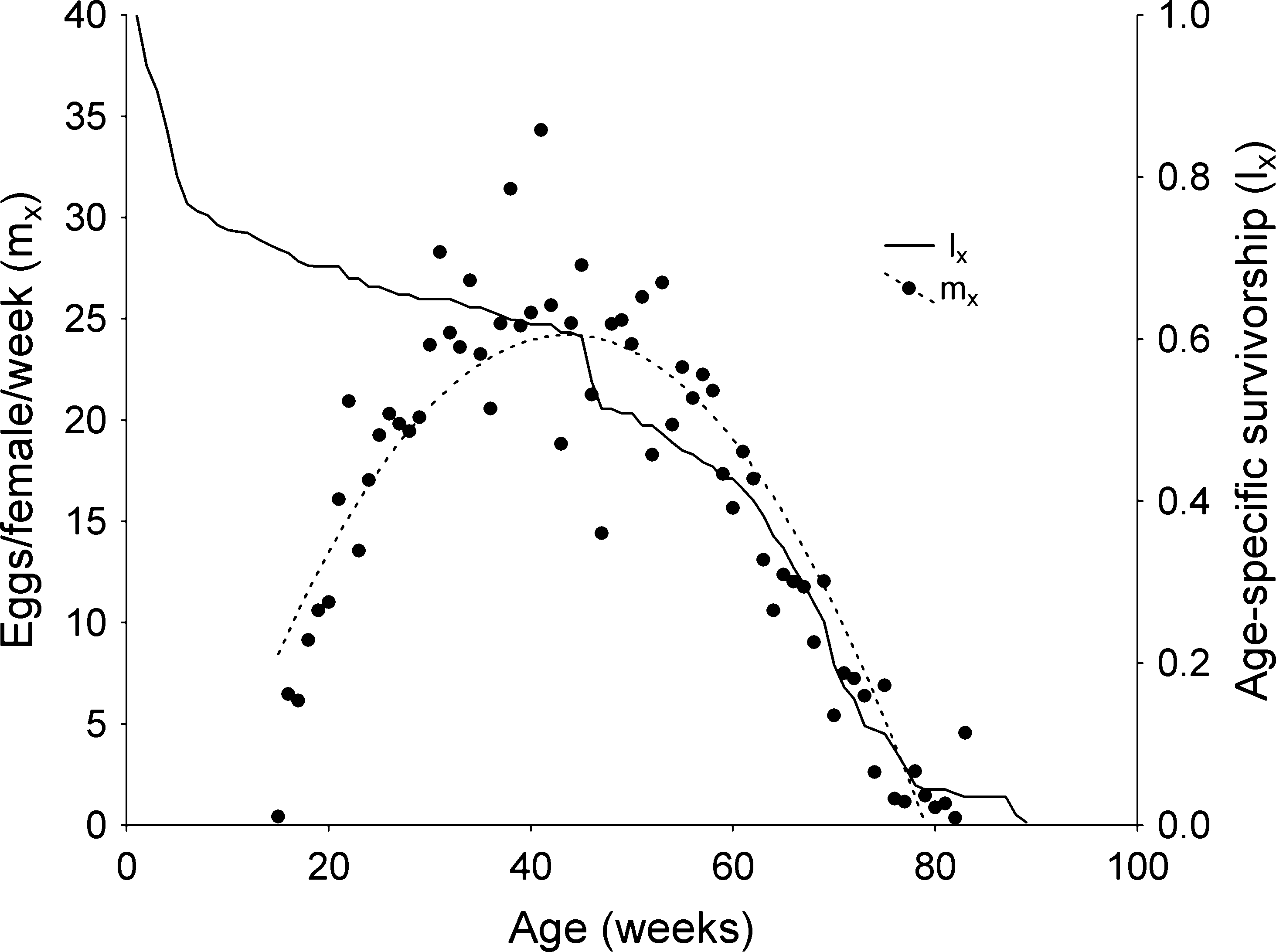 Brief History Mr J S was truly at his wits end. At 64, the ageing process had been far from beautiful and the years sat on him more like the proverbial Sword of Damoceles rather than an achievement of life. Eight years earlier, his coronary artery system had become disease afflicted. This resulted in a heart attack that severely curtailed his normal lifestyle. In order to remain physically