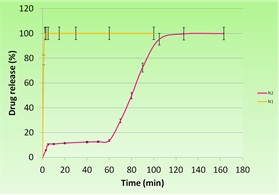 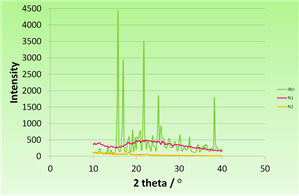 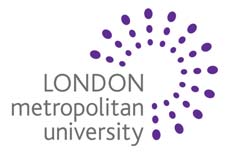 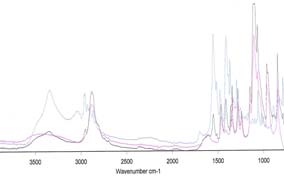 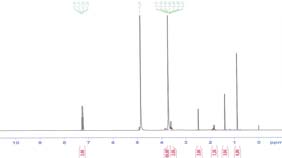 Investigation of Ibuprofen release from PVP,
PVP/alginate and PEO/alginate nanofibers.
A.Y.A Kaassis, Nicholas P. Chatterton, Gareth R.Williams
Faculty of Life Sciences, London Metropolitan University, 166-200 Holloway Road, INTRODUCTION
Electrospinning is an effective technique in the generation of polymeric fibers with a diameter in the range of a micro to nanometre, through a contactless process employing electric fields (Li & Xia 2004). Electrospun nanofibers have attracted much research attention for several applications. Energy storage is one purpose, where nanofibers have been used as a storage device for alternative energy sources such as hydrogen and natural gases. Secondly, fibers may be used for ecological and biomedical purposes, such as sensors for chemical and biochemical detection. Figure 2: FTIR spectra of (pink) ibuprofen; Figure 3: The 1H NMR spectrum of PEO-SA with
Moreover, nanofibers are able to contribute to various medical areas including drug delivery, (Black) PEO-SA-IBU and (pink) PEO-alg. sodium ibuprofen in D O.
genomic medicine, scaffolds for tissue engineering and smart wound dressings (Young-Seak & Ji XRD patterns, given in Figure 4, showed that none of crystalline peaks of the drug were exhibited by the fibers, suggesting that ibu exists in an amorphous form in the fibers, and that the Ibuprofen is a non-steroidal anti-inflammatory drug, frequently used in the treatment of fiber components are mixed at the molecular level.
osteoarthritis, rheumatoid arthritis and inflammation. It also has analgesic properties. However, its long-term administration causes gastrointestinal side effects such as ulceration, bleeding and perforation. Ibuprofen has a short biological half-life of 2.0 ± 0.5 hours. Therefore, repeated doses are necessary to maintain therapeutic efficacy over long periods of time (Kachrimanis et al. The purpose of this study was to encapsulate ibuprofen (ibu) into electrospun nanofibers using different polymer carrier materials, and to investigate their potential as prolonged release systems in different milieus. Polyvinylpyrrolidone-ibuprofen (PVP-ibu), Polyvinylpyrrolidone/alginate- ibuprofen (PVP-SA-ibu), and poly (ethylene oxide)/alginate ibuprofen (PEO-SA-ibu) fibers were Figure 4: XRD patterns: sodium ibuprofen (IBU);
Figure 5: Drug release from PEO-SA –IBU nanofibers
generated by electrospinning and characterised by FT-IR, scanning electron microscopy (SEM) (N2) and PVP-IBU nanofibers (N1) in acetate buffer Differential scanning calorimetry was additionally used to characterise the fibers, and supported the molecular dispersion of ibu in the fibers. 1H NMR spectra of fibers dissolved in D O Ibuprofen loaded fibers were prepared by using 10% (w/v) PVP 360 (Mw = 36 000 Da), 10 % (figure 3) showed that structure of ibu was preserved after electrospinning, and not altered by the PVP / 2% SA (Sodium alginate) and 10% PEO (Polyethylene oxide) (Mw = 40.000 Da) / 2% SA as carrier polymers. 1% (w/v) drug polymer solutions used for spinning. Electrospinnning was A dissolution study in an acetate buffer, the results of which are given in Figure 5, showed that performed with a flow rate of 0.3 ml/h, a spinnaret to distance of 15 cm, and an accelerating the release of ibu from PVP nanofibers was very fast. The PVP-SA fibers released more slowly, and the PEO-SA nanofibers displayed the slowest release. The PVP nanofibers dissolved within The morphology and structures of nanofibers were studied by scanning electron microscopy 30s and released all the encapsulated drug. The PVP-SA nanofibers liberated 100% of the (SEM) and X-ray diffraction (XRD). The stability of Ibuprofen during the electrospinning process incorporated drug after 5min. The PEO-SA nanofibers floated for one hour then sank and started was assessed using Fourier transform infrared spectroscopy (FTIR) and nuclear magnetic dissolving. During the first 60 min the drug release rate was slow and reached a plateau at resonance (NMR). In vitro release of ibuprofen from the fibers was carried out at 37 ºC in three 13.6 %. After 60 min, drug release accelerated and peaked after 127 min, where 100% of the drug media: an acetic acid buffer (pH 3), simulated intestinal fluid (pH 6.8) and phosphate buffered had been released. The drug release was faster in SIF. The PVP nanofibers dissolved entirely with saline (pH 7.4). Drug concentrations in solution were measured by UV spectroscopy. All one minute. After 10 min, 60 % of the drug was released from the PEO-SA nanofibers; measurements were carried out in triplicate.
nevertheless, more than 40% of the drug load stayed in the nanofibers.
CONCLUSION
SEM images (Figure 1) showed that all the fibers with had smooth surfaces and cylindrical In conclusion, sodium ibuprofen was successfully loaded into nanofibers without altering its shapes. The fiber diameters for pure PVP and PVP-ibu fibers were around 450nm. SEM images structure, as proven by UV spectra, FTIR and NMR. The fibers were found to be uniform in size (Figure 1) showed that all the fibers with had smooth surfaces and cylindrical shapes. The fiber and shape. Drug release from the fibers was studied in realistic in vitro conditions, and an diameters for pure PVP and PVP-ibu fibers were around 450nm.
interesting two-stage release mechanism observed for PEO-SA-ibu fibers. REFERENCES
Kachrimanis, K., Nikolakakis, I. & Malamataris, S., 2000. Journal of Pharmaceutical Sciences, 89(2), pp.250-9.
(a) (b) (c)
Li, D. & Xia, Y., 2004. Advanced Materials, 16(14), pp.1151-1170. Figure 1: SEM images of the nanofibers. a) PVP; b) PVP-Ibu; c) PEO-SA-Ibu; d) PVP-SA; e) PVP-SA-Ibu.
Young-Seak, L. & Ji Sun, I., 2010. Preparation of Functionalized Nanofibers and Their Applications. In K. Ashok, ed. Nanofibers. India: InTech, pp. 121-138.
FTIR spectra (figure 2) confirmed successful incorporation of ibu into the fibers, but also showed ACKNOWLEDGEMENTS
small shifts in the positions of the characteristic absorbances. The peaks shift suggest that We thank the EPSRC and Queen Mary, University of London, for access to SEM facilities, and interactions such as H-bonding existed between ibuprofen and the polymers.
AYK thanks London Metropolitan University for provision of a PhD studentship.
RESEARCH POSTER PRESENTATION DESIGN 2011
www.PosterPresentation