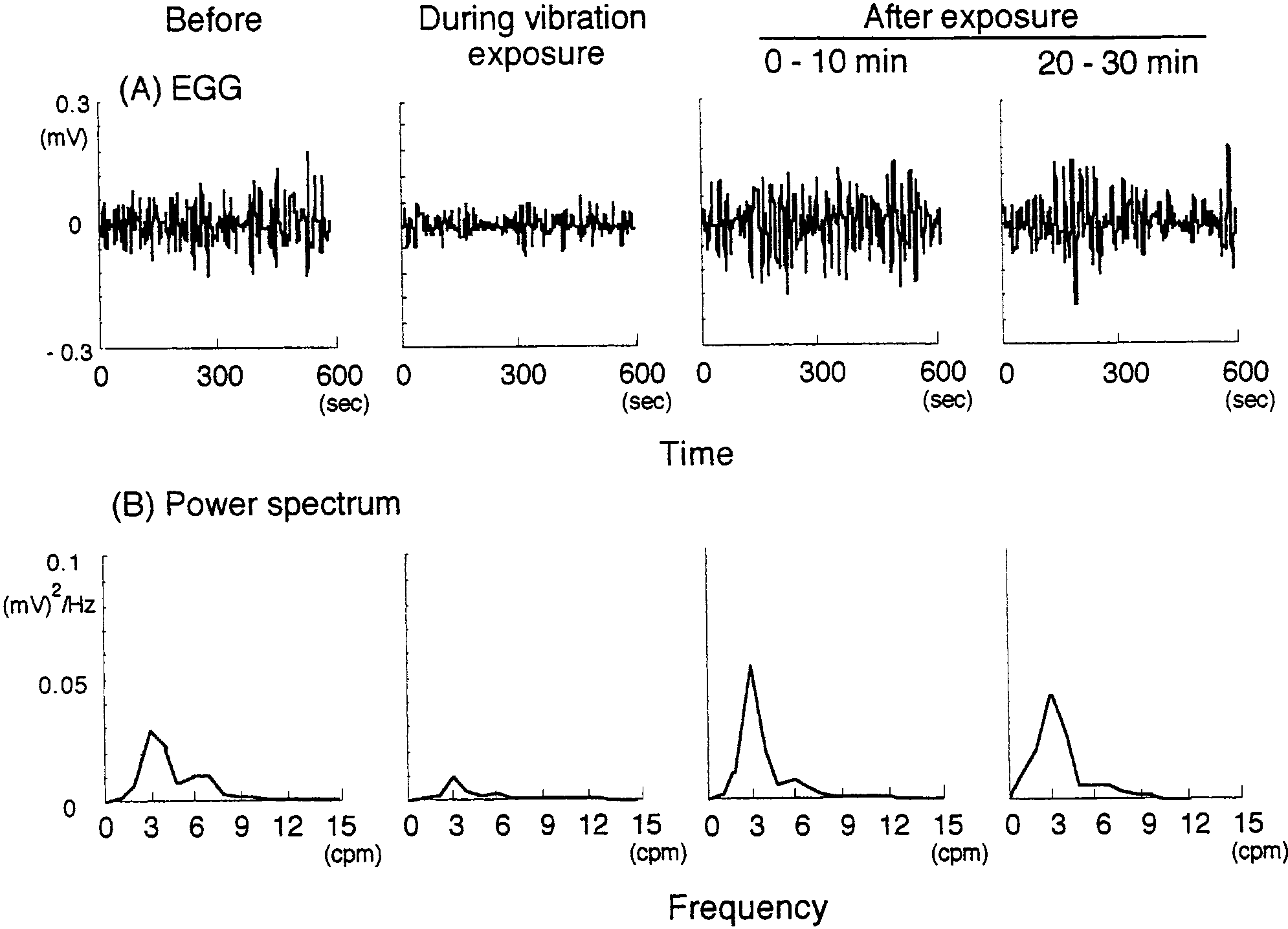 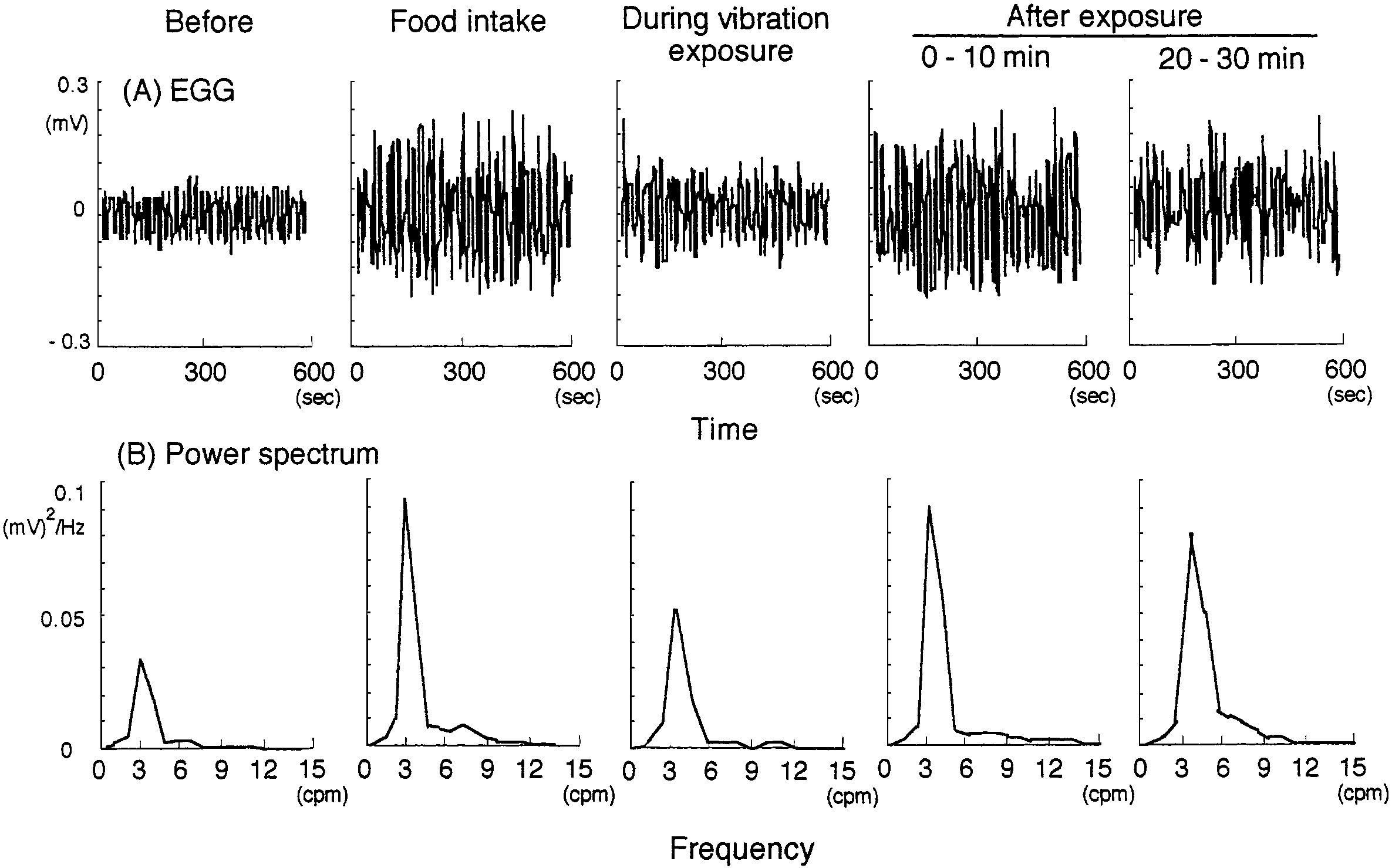 (Smout et al. 1980). Even a higher WBV frequency with short-term exposure (10 Hz, 5 min) reduced the power density of the slow wave component (Ishitake et al.
Brief exposure to WBV (4 Hz, 10 min) can reduce the 1998). Kjellberg and WikstroÈm (1987), however, ob- power spectral density of the slow wave component of served a biphasic phenomenon with an initial increase EGG, suggesting suppression of the gastric motility and thereafter a gradual decrease in the power density with the frequencies of 3, 5.4 and 7.8 cpm by WBV of Fig. 2 The changes of EGG (A) and their power spectra (B) under the in¯uence of food intake and acute exposure to whole-body 3 Hz. They suggested that the gastric motility was af- fected by WBV. The dierence between our ®ndings and Table 1 Eect of whole-body vibration on EGG in fasting state and following food intake. Relative power indicates the proportion of total power comprised by each component. Total power is calculated as a percentage of the control. The values are medians (25%, 75%) 73.2 (64.0, 78.7) ± Ã Ð 85.1 (70.8, 86.9) 19.0 (15.1, 27.1) ± Ã Ð 10.3 (5.8, 18.0) 100.0 Ð Ã ÐÐÐÐÐ 255.6 (130.5, 363.0) ± Ã Ð192.0 (105.0, 332.0) ± ÃÐ 253.6 (137.0, 354.0) theirs may depend on the experimental conditions of the agent can suppress the activity of muscle contraction.
stomach contents, with or without food intake. An in- An alpha-adrenergic blocking agent may suppress the crease in the amplitude of EGG after eating has been contraction of pylorus ring, and also a beta-adrenergic observed by many investigators (Chen and McCallum blocking agent would increase the muscle tone (Good- 1991; Levanon et al. 1998). Although they carried out man Gilman et al. 1990). These pharmacological actions their experiments with no control of food intake or resulted in the suppression of the amplitude of EGG and fasting time, these two factors were strictly controlled in its power spectra by the anticholinergic (Imai et al. 1998) our experiment. There is a possibility of misinterpreta- and alpha-blocking agents, and the beta-blocking agent tion because of confused data at dierent conditions of induced increases in the same parameters in the present food intake. Possible artifacts such as body movements study.
and startle re¯ex should also be considered because there Exposure to WBV produced a further reduction in were no raw EGG waveform data in Kjellberg's report. the activity of the slow wave component following pre- According to our preliminary study, some artifacts due treatment with these drugs. The reduction of slow wave to body movement can actually produce an increase in component by vibration may be due to not only the the power spectrum of the slow wave component.
autonomic nervous system but also humoral and me- Food intake is, of course, a very important in¯uence chanical factors. As for the humoral factors, the control on gastric motility. It is widely recognized that a good of the secretion of gastric juice is stimulated by gastrin correlation is noted among increased amplitude, fre- and the parasympathetic nervous system. Gastrin re- quency of slow wave and gastric contraction, resulting leased from the pyloric glands can enhance gastric from the increase of the contractile activity due to eating motility and stimulate hydrochloric acid secretion.
(Sun et al. 1995). Similar responses modes were ob- Parasympathetic stimulation increases the secretion of served during exposure to vibration under the conditions acid, mucus and pepsinogen by the action of acetyl- of fasting state and food intake. The changes in relative choline. Tactile stimulation of the surface of the stomach power of slow wave at the condition of food intake were mucosa can also in¯uence the gastric secretion. Expo- greater than in the fasting state. It is suggested that a sure to WBV may have a mechanical eect on the suppressive eect of vibration exposure on gastric mo- stomach wall, leading to increased gastric secretion tility may be enhanced under the condition of food in- while gastric motility is not aected (Dupuis and Christ 1966). Suppression of the secretion of gastric acid by an With respect to a mechanism suppressing gastric H2 receptor antagonist is associated with inhibition of motility, we should consider the neurohumoral and gastric motility (Parkman et al. 1998). As there are few mechanical factors which mainly regulate gastric motil- convincing data about a relationship between exposure ity (Guyton 1991). The neural control is provided by the to WBV and gastric secretion, further investigations autonomic nervous system, which includes both choli- should be carried out.
nergic and adrenergic nerve ®bers. Stimulation of the The movement of organs are increased by WBV with parasympathetic nerves leads to an increase in the ac- frequencies of 3±5 Hz and 7±10 Hz (Dupuis and Zerlett tivity of the gastric motility. On the other hand, stimu- 1986). This suggests that passive gastric movement by lation of the sympathetic nerves inhibits gastric motility.
The slow wave component may totally re¯ect the gastric electrical activity, including the muscle tone and con- tractile activities (Smout et al. 1980; Chen et al. 1994). Fig. 3 The changes of EGG (A) and their power spectra (B) under drug intervention (1 anticholinergic agent, 2 alpha-blocking agent, From the pharmacological viewpoint, an anticholinergic 3 beta-blocking agent) and exposure to whole-body vibration 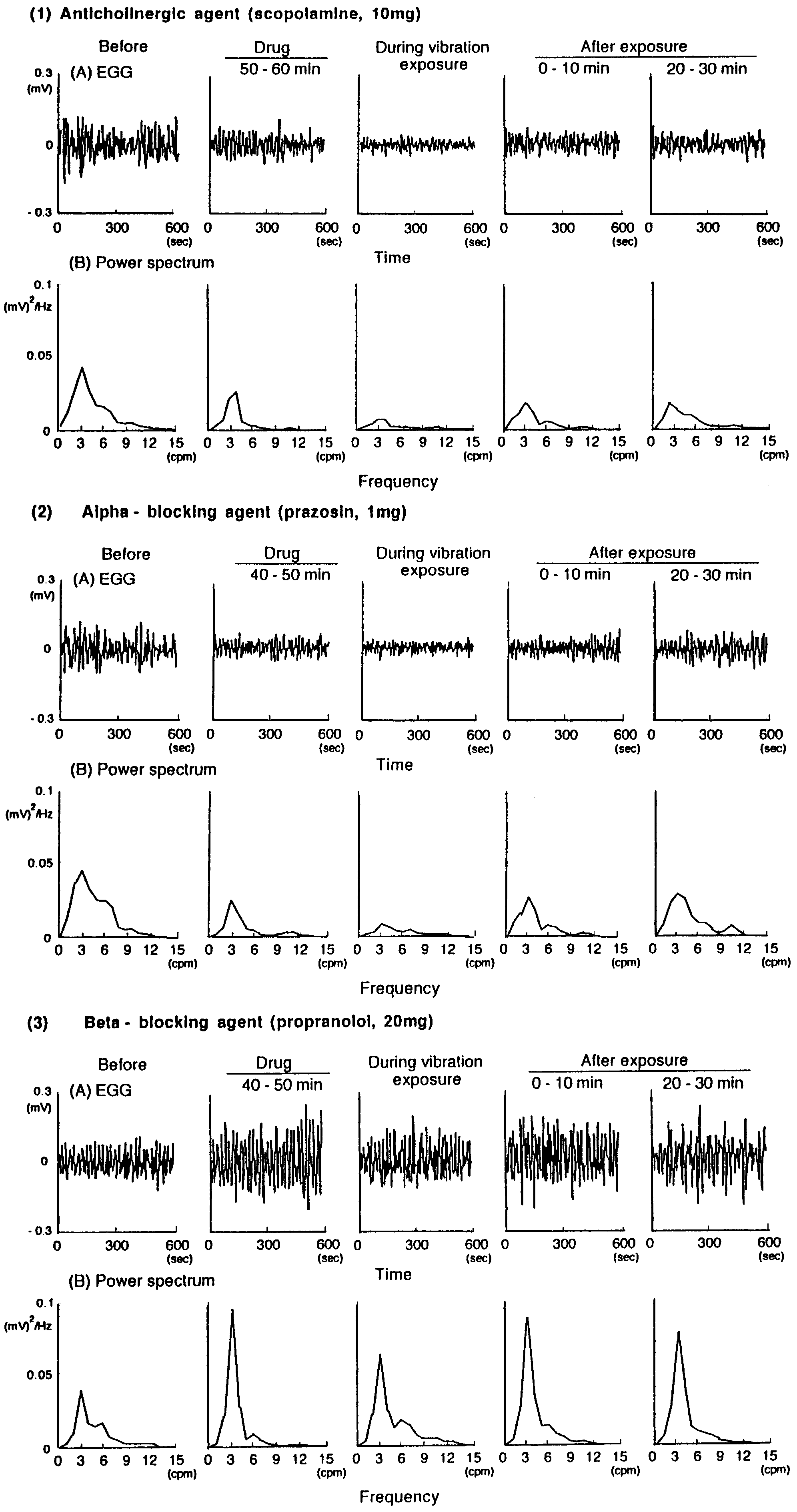