INTRODUCTION
Douglas fir (Pseudotsuga menziesii), which comprises around 5% of the New Zealand exotic timber plantation, has been used untreated as framing timber for over 70 years. A high proportion of this framing lumber, particularly in the South Island, has been cut from thinnings and thus contained a substantial amount of sapwood. There were no restrictions on its use within Following the "Leaky Building Crisis" in New Zealand which came to prominence in 2000 and which revealed widespread decay in untreated framing due to leaks in the building envelope, Codes and Standards which control use of timber in construction were revised. One of the major revisions was to restrict considerably the use of untreated radiata pine and Douglas fir in domestic buildings, in preference to a return of preservative treated framing. Their use untreated in exterior walls was limited to single storey dwellings clad with masonry or brick veneer. Treatment to Hazard Class H1.2 (NZS 3640:2003) was required if they were used with any other cladding systems, such as weatherboards or EIFS. This drew protestations from suppliers of Douglas fir framing. They argued that before the introduction of untreated pine framing in 1997, radiata pine framing was always required to preservative treated, although emphasis was on prevention of insect attack rather than decay, whereas Douglas fir framing was not, irrespective of cladding system. They also argued that most Douglas fir framing was used in "traditional" dwellings, whereas as leak problems were mostly associated with condominium type developments, using complex Mediterranean style of design and clad with monolithic claddings. 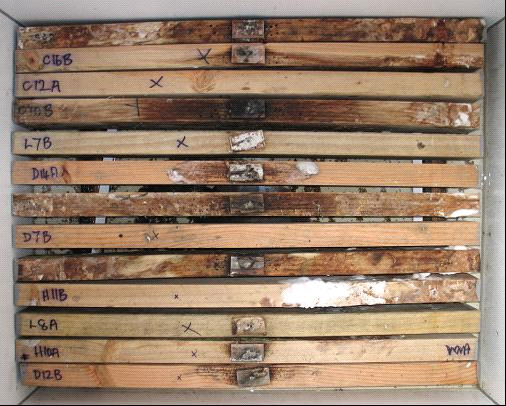 The producers' contention was that Douglas fir was more resistant to moisture uptake, it was more durable than radiata pine and was stronger and stiffer. This latter distinction implied that in the unlikely event that Douglas fir framing became decayed, it would still retain greater stiffness than undecayed radiata pine. Although it has been shown that it is more resistant to rain-wetting (Hedley et al., 2004), there was no comparative information on rates of decay of radiata pine and Douglas fir and the effect on loss of stiffness.
MATERIALS AND METHODS

The five different treatment groups of 20 boards each were included in the trial:
Radiata pine, untreated, kiln dried sapwood. Radiata pine, untreated, kiln dried heartwood. Radiata pine, kiln dried H1.2 LOSP (IPBC + permethrin) treated. Douglas fir, kiln dried untreated “sapwood”. Douglas fir, kiln dried untreated heartwood. The timber was all planer gauged 1000 x 90 x 45mm. Douglas fir “sapwood” samples were cut from timber containing a high proportion of sapwood, but heartwood could not be entirely eliminated and ranged from 0 to 75% within samples with an average of 35%. Samples had a partially decayed feeder block, 70 x 35 x 7 mm, infected with Oligoporus placenta brown rot attached at the centre of one 45 mm edge. Prior to installation samples were immersed in water for two hours. They were then randomly placed on edge, with the feeder blocks facing upward, in 1.0 m (long) x 0.8m (wide) x 0.6 m (deep) plastic tanks (Fig 1). Layers of samples were separated by 10 x 10 mm plastic stickers. There was water in the tanks about 20mm deep. The tanks were placed on a level site at the Scion campus, in an area partly shaded by large trees. Fig 1. Arrangement of samples in the exposure tank
Assessment Methods

Stiffness measurement
At intervals of between 4 and 8 weeks samples were removed from the tank, weighed, assessed for decay and mould and tested for deflection as a plank in a static bending test. Deflection caused by a central 80 kg load was measured with a dial gauge set against the bottom face of the sample immediately below the load. Samples were then returned to their original position in the
Decay Ratings
The surface of the samples under the decay mycelium was tested with a blunt probe to determine whether the decay fungi were damaging the framing. The decay rating system used was similar to AWPA Standard E7-93 (AWPA, 1999), although it specifically applied to the area on each 9 = First stages of decay or damage up to 3% of cross-section. 8 = Lightly established decay, 3-10% of cross-section. 7 = Well established decay, 10-30% of cross section. 6 = Deep established decay, 30-50% of cross section. 4 = Severe decay, nearing failure, more than 50% of the cross section. RESULTS AND DISCUSSION
Moisture content calculations were based on sample weight (Fig 2.). Weight is reduced by significant decay and this will have made moisture content calculations inaccurate, particularly in the untreated radiata pine and latterly in the Douglas fir sapwood groups. They were taken mainly to ensure that moisture contents were suitable for decay throughout the duration of the oisture content %
Weeks expsoure
Fig 2 Mean moisture content of test samples

From Fig 4 it is seen that the initial deflections for both Douglas fir sapwood and heartwood
were approximately half that of the pine samples. The test rig was set up in such a manner that a deflection of 10mm occurred when the sample broke. Untreated radiata pine sapwood decayed rapidly, although it wasn't until the mean Index of Condition fell below 6 that deflection under load exceeded that at the start. Untreated radiata pine heartwood had greater decay resistance and increases in mean deflection occurred more Even though obvious decay was occurring in Douglas fir, where Indices of Condition were between 6 and 8 after 64 weeks, no loss in stiffness was recorded in that time. Significant loss in stiffness in Douglas fir sapwood only commenced at week 90 when Index of Condition was ~6. Neither Douglas fir heartwood nor H1.2 treated radiata pine showed any loss of stiffness during eflection m
D
Weeks exposure
Fig 4. Deflection against time

CONCLUSIONS
Decreasing order of stiffness loss (and weeks to first measurable loss) was: untreated radiata pine sapwood (24), radiata pine heartwood (48), Douglas fir sapwood (65), Douglas fir heartwood >106), treated radiata pine sapwood (>106). The results indicate that for untreated Douglas fir in particular, the presence of observable decay - the main criterion for replacement of framing when a "leaky building" is rehabilitated - may not truly reflect residual stiffness, which would be retained when leaks were rectified and the framing dried. Remedial treatments of the Boracol® type could be applied as a very cost effective alternative to replacing the partly decayed framing.
REFERENCES

It’s ______ degrees in MELBOURNE… Partly cloudy tonight, with a low of 15 degrees… I’m ROD SWIFT… with JOY NEWS at 7. *** Victims support groups say the Catholic Church may be preparing to acknowledge its involvement in child sexual abuse in Australia… after Cardinal GEORGE PELL apologised to those who "suffered at the hands" of priests during his Christmas message.

Cornerstones Practice-Based Research Syntheses of Child Find, Referral, Early Identifi cation, and Eligibility Practices and ModelsEducational Outreach (Academic Detailing) The use of an educational outreach procedure called academic detailing for changing physician pre-scribing practices was the focus of this research synthesis. The practice is characterized by brief, repeated,