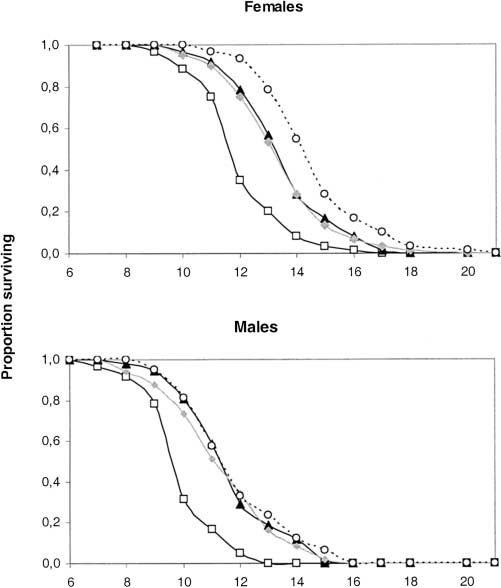 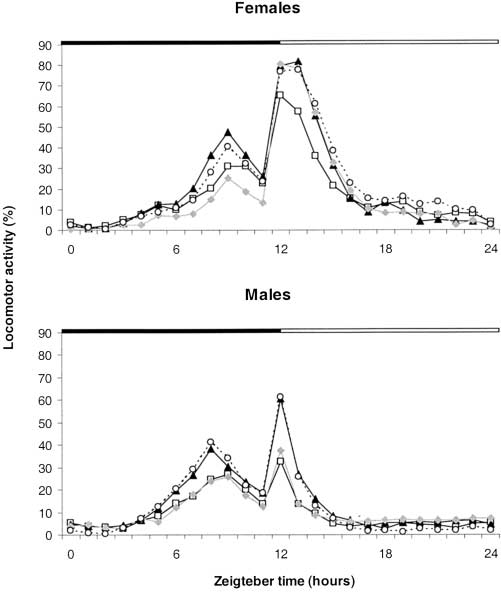 Figure 1.—Starvation survival curves of female and male Figure 2.—Mean curves of the locomotor activity rhythms wasps with differing Wolbachia infection statuses. (ᮀ) Pi(123), of A. tabida lines Pi(123), Pi(13), Pi(23), and Pi(3). Males and (᭡) Pi(13), (᭜) Pi(23), (᭺) Pi(3).
females were measured for 3 days under LD 12/12 (Zeitgebertime) with light off at Zt0 and light on at Zt12. The black-and-white rectangles at the top of the figure represent night pDrive cloning vector (QIAGEN, Valencia, CA). Specific PCR and day, respectively. (ᮀ) Pi(123), (᭡) Pi(13), (᭜) Pi(23), assays were used to identify the Wolbachia strain present in the clone. The DNA concentration of each sample was mea-sured by OD absorbance at 260 nm. Standard curves wereplotted using five dilutions of this vector (from 102 to 108 and Pi(123) were the lightest. Thus, the greater the copies) containing one copy of a specific wsp sequence, which diversity of Wolbachia lineages harbored by the insects, is a single-copy gene (Braig et al. 1998). The number of the less they weighed. More diversity in Wolbachia also Wolbachia cells was calculated as described in Noda et al.
(2001). These values must be considered as semiquantitative led to a shorter life span of the host (Table 1; Figure estimates of Wolbachia cell numbers.
1). Life span of doubly infected wasps was intermediate Wolbachia abundance was measured individually on 5-day- for both sexes, but the difference from simply infected old males and females, either in whole bodies or separately wasps was not significant in the males. The rate of loco- in head plus thorax and abdomen of the same individual.
motor activity also varied with the infection status of Density was obtained by correcting the number of Wolbachiaby the mean fresh weight of insects of the line. The ratio of individuals (Table 1). As for dry weight and life span, Wolbachia cells in the abdomen to the sum of Wolbachia in singly infected wasps had greater locomotor activity than head plus thorax and abdomen was calculated individually.
triply infected ones, but in this case the difference wasnot significant for the females. In contrast, the profileof the rhythm was the same regardless of infection status (ANOVA, d.f. ϭ 3189, F ϭ 1.763, P ϭ 0.16, Figure 2).
Infection cost: Among the seven fitness components
Total Wolbachia density: Previous findings have
studied here, three do not vary according to the infec- shown that infection cost increases with bacterial diver- tion status: productivity, fecundity, and tibia length. For sity. To find out whether this is linked to density varia- sex ratio, a marginally significant effect was detected, tions, we measured the number of Wolbachia cells in with a potentially higher proportion of females in the male and female Pi(3), Pi(13), Pi(23), and Pi(123) (Ta- triply infected line. However, this trait is highly variable ble 2). In all these lines, the numbers of Wolbachia and and no such effect was detected in the third block. Clear their relative densities (number of cells per milligram conclusions were obtained only for dry weight, adult of fresh weight) were higher in females than in males survival, and rate of locomotor activity (Table 1).
(Mann-Whitney test, P Ͻ 0.001).
Pi(3) individuals of both sexes were the heaviest, Despite the fact that the cell numbers obtained by Pi(13) and Pi(23) had similar and intermediate weights, real-time quantitative PCR were rather low and may have 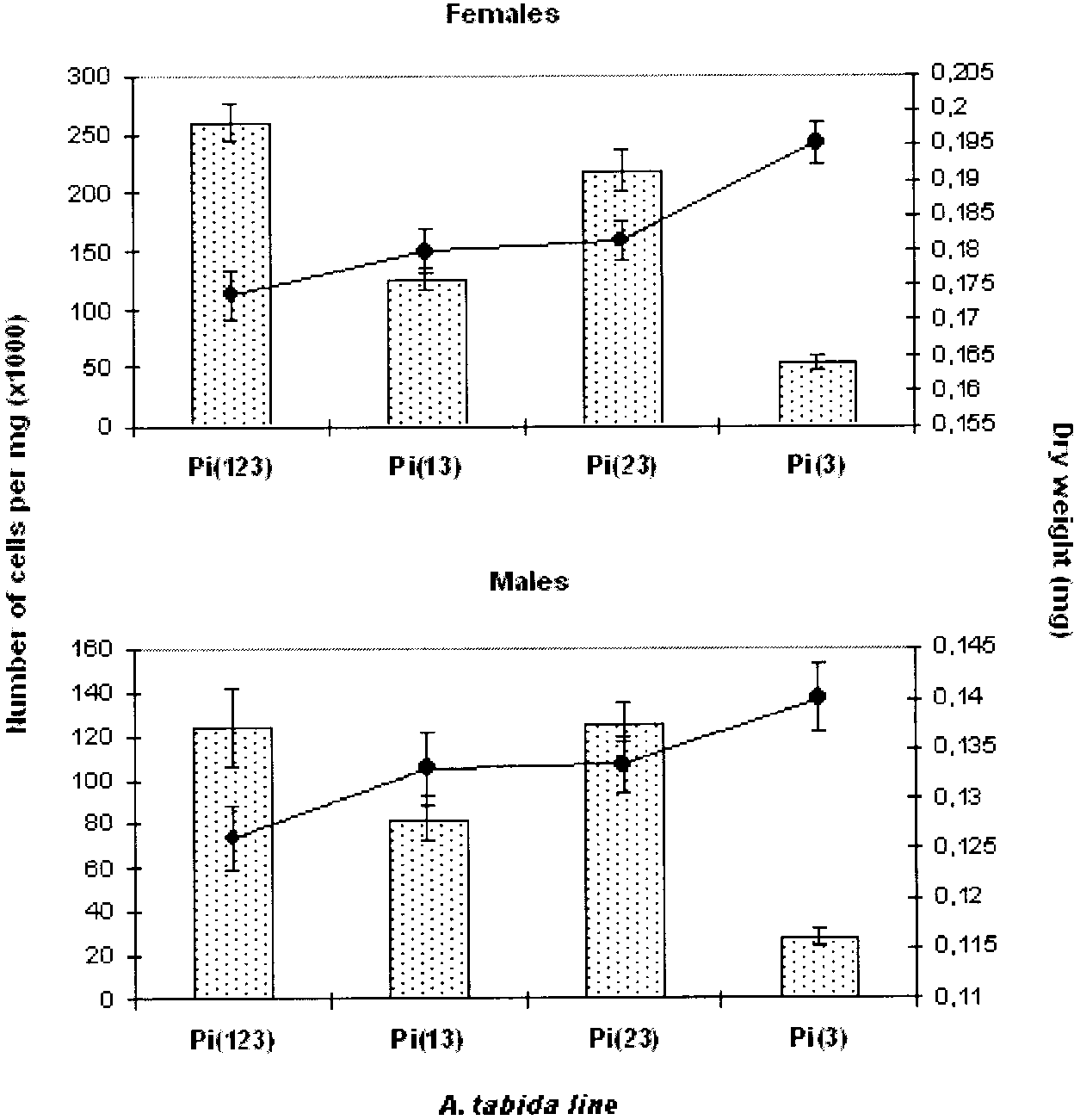 Virulence, Multiple Infections and Regulation of Symbiotic Population Wolbachia density in A. tabida species
Mean values ϮSE and statistical analysis of the total number of Wolbachia cells per wasp (eight replicates per sex and line) are shown. The analyses were carried out using the Kruskal-Wallis nonparametric test. Meansmarked with the same letter are not significantly different (Mann-Whitney tests, P ϭ 0.05).
been underestimated, in both sexes the total Wolbachia there was no significant difference between males of density depended on the combination of the Wolbachia the two doubly and the one triply infected lines.
strains co-infecting the same individual host (Kruskal- Overall, these findings demonstrate that increasing Wallis test, P Ͻ 0.005). Singly infected individuals of the mixture of Wolbachia strains results in a higher the Pi(3) strain had the lowest density, which was less physiological cost to the host and also leads to higher than one-quarter of that in Pi(123). In females, the Wolbachia density. This means that the cost of infection density in the two doubly infected lines was intermediate is also positively correlated with bacterial density, as between those of the singly and triply infected lines, but it was lower in Pi(13) than in Pi(23). In contrast, Strain-specific Wolbachia density: We have shown that
Figure 3.—Wolbachia density and dry weight.
The Wolbachia density (histogram) and dryweight (curve) of Pi(123), Pi(13), Pi(23), andPi(3) individuals are presented. Values corre-spond to the average of eight individuals for den-sity and of 30 individuals for dry weight. Bars showthe standard error. 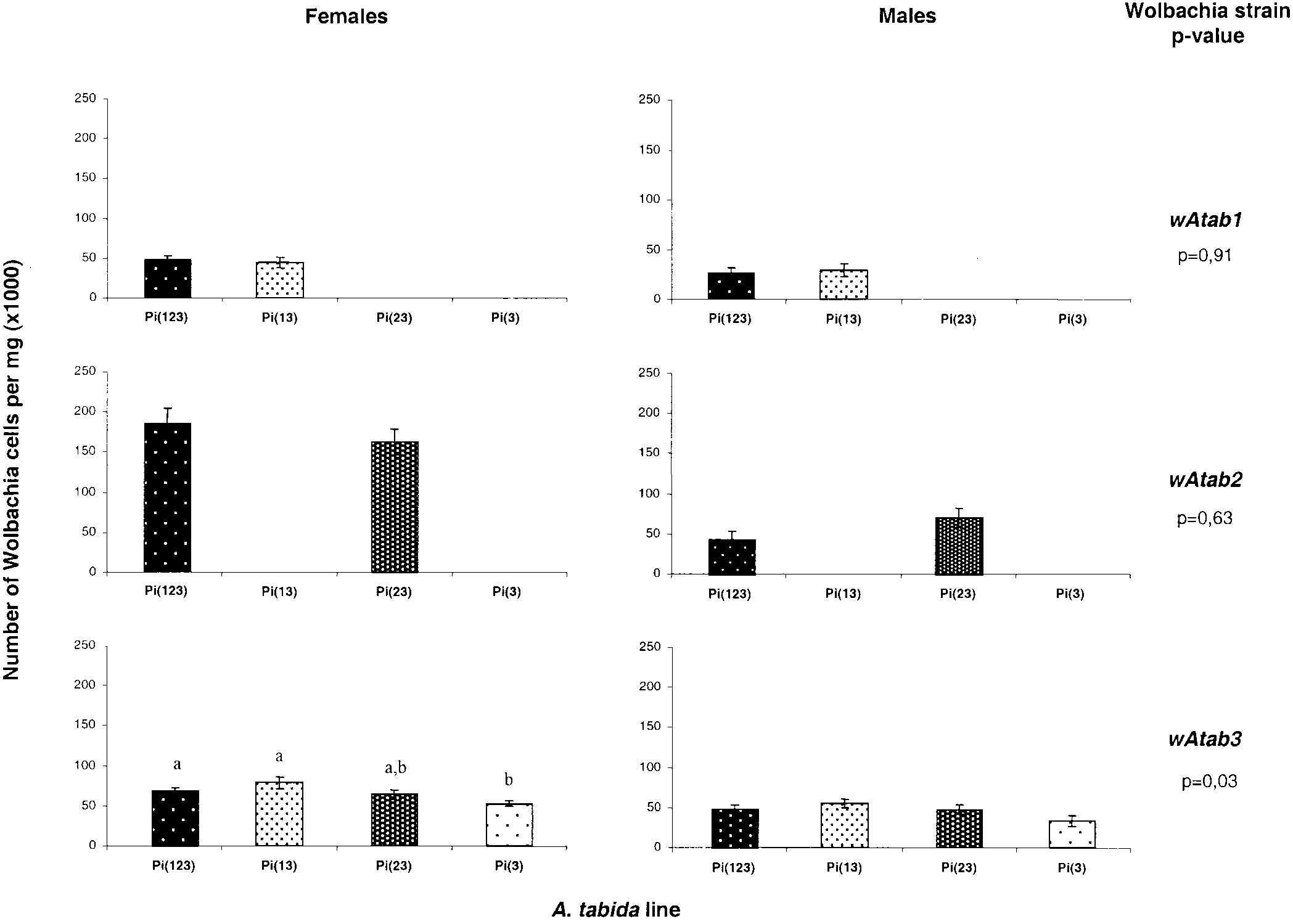 gaming operations Itsoundslikeafunnyquestion,butwhenyoustarttothinkabout it, it can lead to a little bit of panic. Jeez, how do I know what Idon’t know? Where do you go to find the answer when you don’teven know the question to ask? When I do training on technologyrisk assessments, I start by asking this question. People don’t knowhow to answer and sit there with a puzzled look on th