intensetimes issue 12. Spring 2011
Aspects of severe heart failure
A wide-ranging debate about many aspects of severe heart failure opened with a review by Professor Anthony McLean (Sydney, NSW, Australia) of evidence for the premise that heart failure in most if not all of its many manifestations is an inflammatory disorder – or at least a condition in which signs usually associated with inflammation are often encountered. Professor McLean conceded that there are some anomalies that do not fit easy with the idea of heart failure as fundamentally an inflammatory condition but nevertheless felt that inflammation needs to be taken more seriously as an aspect of heart failure, both as a mechanism and as a potential target for intervention. Following on from Professor McLean, Professor Karl Werdan (Halle, Germany) set a precedent for other speakers by modifying the official title of his talk. In this case the alteration was the small but significant addition of a question mark to the phrase “Sepsis is the main cause of death.” The message of this amendment seemed clear: sepsis may be a major cause of death, but this is unlikely to be universally the case. One strand of the evidence connecting heart failure with sepsis may be traced to the endotoxaemia theory of Niebauer and colleagues (Lancet 1999;353:1838–42); the essence this theory was that mesenteric congestion created circumstances in which endotoxaemia might develop. (Inflammation was also thought to be an essential feature of this cascade.) Reports such as that of O‟Malley and colleagues (Br J Anaesth 2004;92:131–3), who described an association between high intra-operative plasma levels of endotoxin and adverse postoperative outcome lent support to the view that endotoxaemia might be caused by gut hypoperfusion during surgery and was associated with postoperative organ dysfunction. Professor Werdan identified cardiogenic shock (CS) as the aspect of heart failure most likely to be associated with sepsis. He commented that there are two distinct presentations of CS: one surprisingly benign and often following a relatively uneventful course to recovery; the other a crisis of survival associated with MOF. Drawing on experience in the SHOCK study (Kohsaka S et al. Am J Cardiol 2007;99:802–4), Professor Werdan said that evidence of systemic inflammatory response syndrome (SIRS) suggestive of sepsis is encountered in some 15% of patients with CS. Noting that a collapse in SVR is the primary haemodynamic feature of sepsis in CS, he suggested that both systemic inflammation and sepsis may exert their deleterious effects by preventing compensatory vasoconstriction.a

intensetimes issue 12. Spring 2011
Measuring contractility Regardless of whatever other factors may be operating it is hard not to regard severe heart failure as being at some level a problem of inadequate cardiac contractility. This in turn places a premium on being able to measure contractility. However, according to Dr Sabino Scolletta (Siena, Italy) the gold standard of the physiology laboratory – measuring the maximum velocity of contraction of an isolated myocardial fibre not subject to load – clearly is not applicable in the clinic. All the methods that may be used clinically have their limitations and at present no single measurement meets the criteria for a fully satisfactory measure of contractility. Indeed, it may be argued (and Dr Scolletta did) that it is infeasible that a single number can adequately characterize the complex geometric and volumetric functions of the left ventricle: multiple parallel measures are needed to give a realistic and relevant estimate. Measures in clinical use for the estimation of myocardial contractility currently include: The first of these measures suffers from the limitation that it is influenced by preload and may not therefore faithfully reflect contractility (for which stroke volume is a surrogate). There is a wide range of ejection-phase indices, most of which can be obtained via echocardiography, but overwhelmingly the one first called upon by clinicians wanting some simple indicator of contractility is left ventricular ejection fraction (LVEF). This also is subject to influence by cardiac loading; moreover, and partly because of the influence of preload, LVEF does not in fact reflect changes in contractility in a failing heart, especially during the early phases of failure when compensatory mechanisms are functional. Nevertheless, in the absence of anything better (or more easily appreciated), LVEF seems likely to remain a staple of clinical assessment for some time (see McGowan JH, Cleland JG. Am Heart J 2003;146:388–97 & Schiller NB. idem 380–2, for some perspectives on this matter). Transoesophageal echocardiography with thermodilution has been used to derive the
cardiac function index (CFI) and the global ejection fraction (GEF) from the left
ventricular fractional area of change (LVFAC) in mechanically ventilated ICU patients
(see Panel on page 8 for definitions) (Combes A et al. Intensive Care Med
2004;30:1377–83. CFI >4 and GEF >18% were both identified as indicators of good 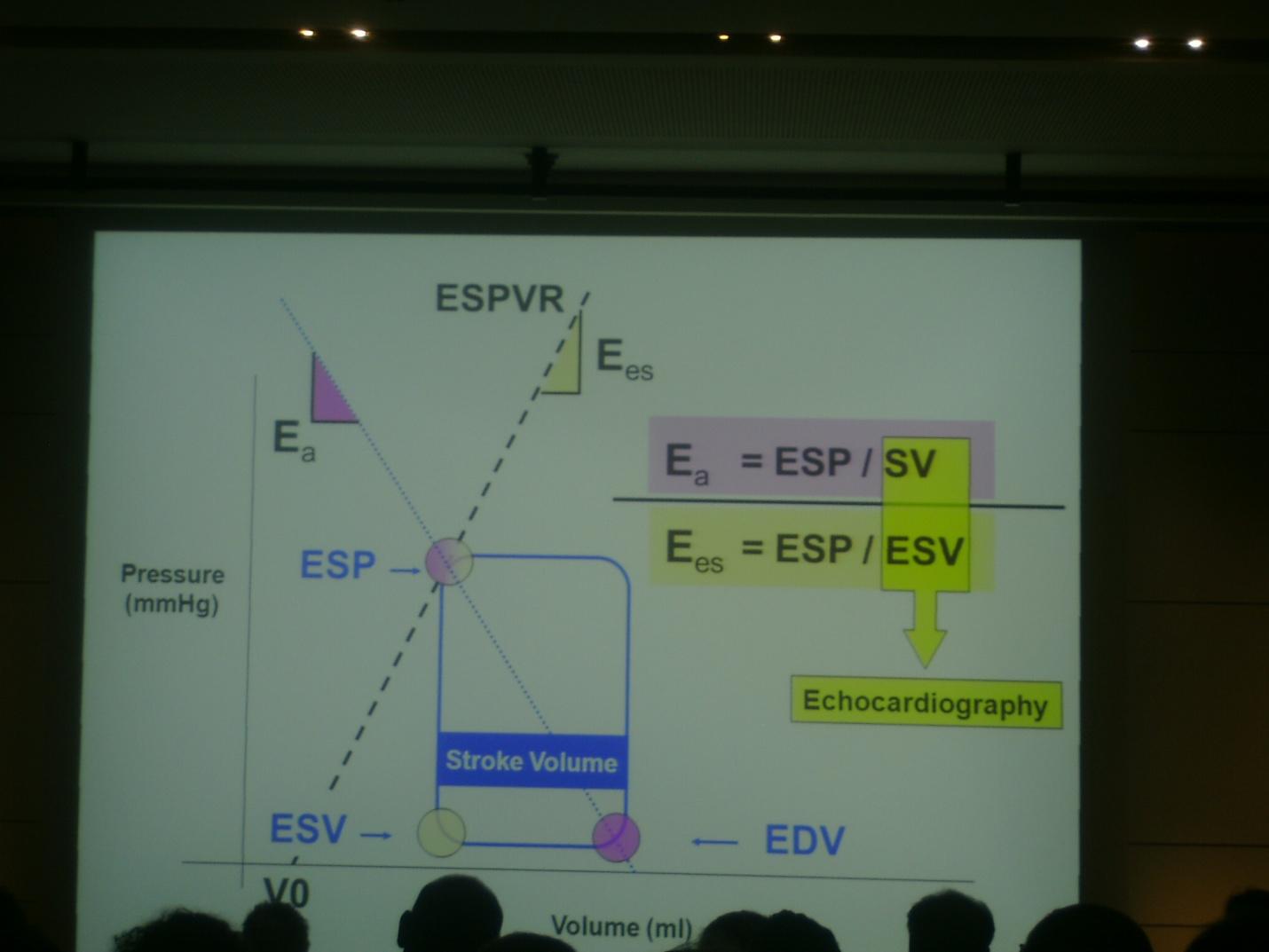 A depiction of the some principles involved in evaluation of ventricular contractility in a setting of optimized ventricular-arterial coupling. See page 3 for further details of this method and the clinical significance of the Ea/Ees ratio. Ea = arterial elastance; Ees = end-systolic ventricular elastance; SV = stroke volume; ESP = end-systolic pressure.