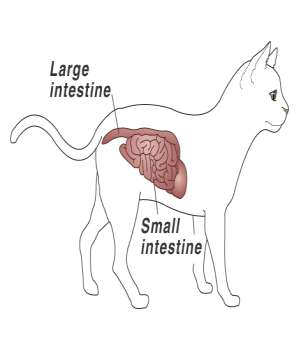 What is inflammatory bowel disease?

Inflammatory bowel disease (IBD) is not a specific disease. Rather, it is a specific reaction that the
stomach or intestines have to chronic irritation.
What are the clinical signs of IBD?

If the stomach is involved, your cat will
experience chronic vomiting. This is the most
common clinical sign of IBD in cats. If the
intestines are involved, chronic diarrhea will
occur. In some cats, both parts of the digestive
tract are involved so both vomiting and diarrhea
occur.
If the disease occurs for several weeks to months,
weight loss and poor appetite are common.
When is IBD most likely to occur?

IBD is most common in middle-aged to older cats, usually 5-12 years of age.
How is IBD diagnosed?

The chronic irritation that causes IBD stimulates the body to send cells from the immune system to the
area. The most commonly found cells are lymphocytes and plasmacytes. Occasionally, eosinophils and
neutrophils will be found. Thus, the disease is diagnosed when these cells are identified in abnormal
levels in the tissue. A pathologist is responsible for this part of the diagnosis; his or her report usually
calls the disease lymphoplasmacytic gastritis (stomach), lymphoplasmacytic enteritis (intestine), or
lymphoplasmacytic colitis (colon).
In order to obtain these cells, a biopsy is required. This requires a general anaesthtetic and may be
preformed via an endoscope or an exploratory laparotomy.
Is that all that is required for diagnosis?

The tissue reaction that occurs in the stomach, small intestine, or colon is diagnosed with biopsy.
However, determining what is causing the tissue reaction to occur requires further testing. Tests or
treatments should be performed to rule out stomach and intestinal parasites, cancer, and infections.

Diseases such as hyperthyroidism and diabetes are considered. In addition, diseases of the kidney, liver,
and pancreas should also be ruled out. In many cases, the exact cause cannot be determined.
How is IBD treated?

The ideal way to treat this problem is to diagnose the underlying disease that is causing the reaction.
Sometimes the above mentioned tests will do that, and sometimes a cause cannot be found. In the latter
situation, the disease is called idiopathic. That means that a disease is present, but there is no known
cause. Many cases of IBD are considered idiopathic. Some cats with IBD respond to a change in diet.
This is done in two ways. First, a food is chosen that contains a protein source that is new to the cat. If
that is not effective, a high-fiber diet is tried. Unfortunately, a true food trial requires that the test diet be
fed exclusively for 6-12 weeks.
If dietary therapy is not successful or feasible, drugs are used to suppress the inflammatory reaction.
Corticosteroids (“cortisone”) are the most effective and are used initially. Other drugs are tried if
corticosteroids are not successful.
Do corticosteroids cause side-effects in cats?

Corticosteroids are notorious for causing a variety of side-effects in humans. However, this is rarely the
case in cats. Regardless, to minimize any possible adverse effects, our goal is to use the lowest dose that
is effective and to give it on an every other day schedule. It will be necessary to begin therapy with a
rather high dose, but once response occurs, the dose is tapered to a minimal level.
Why is it better to give steroids every other day?
Prednisolone, the most commonly used corticosteroid, is in the body about 36 hours after it is given by mouth. If it is given daily, some of the previous day’s dose is still present. The adrenal glands produce corticosteroids for the body. If a prolonged level of prednisolone is in the body, the adrenal glands receive a message telling them to stop production. This will affect the production of corticosteroids and other important substances. By giving prednisolone every other day, the last dose is out of the body for about 12 hours before the next dose is given. During this 12 hour period, the adrenal glands are stimulated to function. The cat’s adrenal glands function primarily in the morning hours. By giving prednisolone in the evening, the 12 hour off period will occur when the adrenal glands are ready to work. Thus, the preferred way to give prednisolone on a long-term basis is to give it every other evening. Even if several tablets are given, all are given at the same time.
Does this mean that I will be giving prednisolone to my cat for the rest of its life?

Long-term therapy is required for many cats. Generally, a cat is treated for a few months then
prednisolone is discontinued to see if it is still needed. If the signs of vomiting or diarrhea recur, it is
resumed.

Are other anti-inflammatory drugs used?

Prednisolone is the most effective anti-inflammatory drug with the least side effects. However, it is not
effective in all cats. Sometimes a stronger drug is used initially to gain control of the disease. Then,
prednisolone is tried again as a maintenance drug.
Could stomach infections be a cause of IBD?

There are some spiral-shaped bacteria that can cause vomiting in cats. The most common is Helicobacter
pylori. These bacteria have been shown to be the cause of disease, including stomach ulcers, in humans
and are also pathogens in cats. However, they are also found in many normal cats and humans. Therefore,
just finding spiral-shaped bacteria on biopsy is not always meaningful. It is considered a pathogen only if
an associated inflammation is in the stomach mucosa.
Are these infections treatable?
Usually. When found in humans, successful treatment may require several medications or combinations
of medications. Currently we are using what is effective in humans to treat cats. This approach is
successful in most cats, but we have a good deal to learn about the most effective means of treatment.
Can these bacteria affect me or my family?

This is a concern for all of us who have cats. It is known that many people have these bacteria in their
stomach for decades before disease occurs. Therefore, it is almost impossible to know the source of the
bacteria. It is doubtful that cats are involved in the transmission process, but that has not been determined
at this time.

What about hair balls?

Some cats are meticulous groomers. These cats usually swallow hair every day. Since hair is not
digestible, it could easily be a source of chronic irritation to the stomach or intestines. Frequent brushing
and the use of hairball medications are recommended for cats with IBD, especially if they have a history
of vomiting or passing hairballs.

What is the prognosis?

If response occurs to a diet change, the cat can be maintained on a different diet for the rest of its life (if
the diet is a balanced diet for cats). If the cat responds to medication for stomach bacteria, a good
prognosis is justified. If response occurs to corticosteroids, the long-term prognosis is also good if
administration of the drug is feasible. However, if there is no response to diet or corticosteroids, the
prognosis is more guarded. At that point, further testing is suggested to see if an underlying disease can
be found.
This client information sheet is based on material written by Ernest E. Ward Jr., DVM. Copyright 2002 Lifelearn Inc. Used with permission under license. July 14, 2010.

How is Obsessive Compulsive Disorder Treated? 1. Behavioral Treatment for Compulsions: Never discontinue these medications abruptly and Obsessive One of the most effective psychological treatments is always consult a physician prior to decreasing them. exposure plus response prevention (ERP). Very 3. Rebuilding Confidence Compulsive basically, ERP involves exposure to t