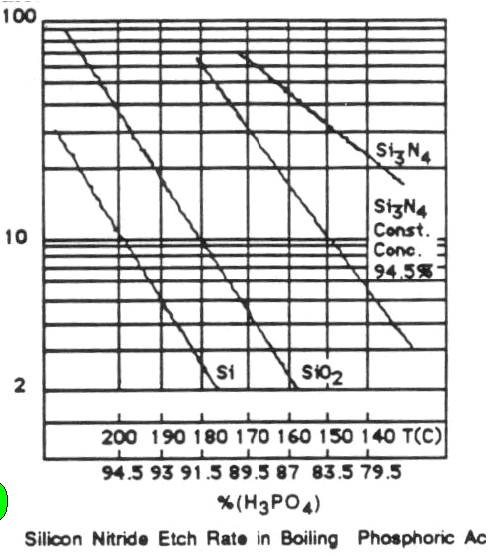 Wet Etching of Silicon Nitride with Heated Phosphoric Acid
The boiling point of phosphoric acid varies with the concentration of the acid. On the graph below, the x-axis shows the boiling point (140ºC – 200ºC) of phosphoric acid solutions for a range of acid concentration (79.5% – 94.5%). The etch rate of silicon nitride varies with the temperature and the concentration of the acid. Since the bath is operated at high temperature, water readily evaporates from the solution and the concentration of phosphoric acid changes. Therefore, a silicon nitride wet etch station needs a mechanism to control the concentration of the acid as well as the temperature of the bath.
W. van Geldger and V. E. Hauser. The Etching of Silicon Nitride in Phosphoric Acid with Silicon Dioxide
as a Mask. J. Electrochem. Soc. 114(8), Aug. 1967, pp. 869-872.
Starting with an 83.5% acid concentration and a set point of 160ºC, the solution will boil when it reaches 150ºC. As the temperature is increased from 150º to 160ºC, water will boil off and the solution will become more concentrated. At 160ºC, the concentration is now 87%. With closed loop temperature control, the solution will continue to boil at 160ºC and will become more concentrated. Note, though the boiling point increases above 160ºC as the concentration goes above 87%, water can still evaporate from the solution at the bath controlled temperature of 160°C. Therefore, unless water is put back into the system, the solution becomes more and more concentrated, the etch rate increases and is not controlled. The two main techniques for controlling the water content are reflux condensers and drip systems. With a reflux condenser, a cold collar is put above the bath, water condenses on the inside of the collar and runs back into the bath. Since the bath is not sealed, this strategy does not account for the water vapor that does escape from the system and solution concentration will increase – though more slowly than in a system with no condensing collar. A drip system is just that – a small amount of DI water is constantly dripped into the tank to make up for the evaporating water. The problem with this strategy is the drip is either too slow – and the solution becomes concentrated – or too fast and the bath becomes diluted. What is needed is a method to link the temperature of the bath to the injection of water. The Microlab developed such a system for Sink7. There may also be commercial versions of this equipment solution. The output of the temperature controller is tied to a DI injection valve. When the bath reaches set point, a signal is generated by the temperature controller that stops firing the bath heater. This same signal is tied to the DI injection valve. That is, when the bath reaches set point, the DI valve is opened for a defined amount of time thus allowing an injection of fresh DI water into the bath. This solution adds water to the system to keep it from becoming too concentrated but it only adds water when the solution needs it - when the solution has reached the desired boiling point. The length of time that the injection valve is open is now another system variable for control of etch rate. If too much water is injected, the temperature and concentration) decrease too much; and, the etch rate will vary between a low etch rate extreme just after injection and a high etch rate extreme when the bath reaches set point. The injection timer setting has been optimized for a bath temperature of 160ºC. If labmembers need a higher or lower bath temperature to achieve a faster or slower etch rate, this timer setting will need to be adjusted or your etch rate will be difficult to predict and control. Discuss your etch rate needs with Microlab staff before selecting a different temperature for the phosphoric acid bath.

Pertussis, or whooping cough, is a highly contagious bacterial infection that causes an uncontrollable, violent cough lasting several weeks or even months. It is caused by a bacterium that is found in the mouth, nose and throat of an infected person. Pertussis may begin with cold-like symptoms or a dry cough that progress Pertussis can occur at any age. Children who are too young to be fully va

COUR DE CASSATION Public hearing of 10 May 2011 THE COUR DE CASSATION, COMMERCIAL, FINANCIAL AND ECONOMIC CHAMBER, has handed down the following decision: Ruling on the appeal on points of law lodged by Daiichi Sankyo Company Limited , whose registered office is located at 5-1 Nihonbashi-Honcho 3-chrome Chuo-Ku, Tokyo (Japan), against the decision handed down on 6 November 200