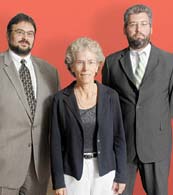 Neil Kodsi, Carlton Fields; Miriam Harmatz, Florida Legal Services; Shawn
Boehringer, Legal Aid Service of Broward
Medicaid recipients across the nation won a victory when Florida’s Agency for Health Care Administration dropped its appeal in a federal class action case on coverage of the prescription drug Neurontin. A team of three attorneys led by Miriam Harmatz of Florida Legal Services filed a complaint in the Southern District of Florida on behalf of Medicaid beneficiaries, claiming AHCA was interpreting drug coverage rules far too strictly. “The state was trying to keep Medicaid from covering legitimate uses of Neurontin, which is prescribed for a number of maladies from pain management to bipolar disorder,” said Neil Kodsi, a shareholder at Carlton Fields, who worked on the case on a pro bono basis along with Harmatz and Shawn Boehringer of Legal AId Serivces of Broward County. The Federal Medicaid Act requires states to follow federal requirements for prescription ACHA argued Medicaid programs should only cover FDA-approved uses for prescription drugs. Attorneys for the class of an estimated 6,000 Medicaid recipients taking Neurontin maintained federally approved uses include those outlined in three congressionally approved drug compendia even without FDA approval. “There are two types of uses for a medication,” Kodsi said. “There is the FDA-approved use, which is the use that drug manufacturers advertise. “But after the drug is approved by the FDA and is on the market, it is extremely common for doctors to prescribe it for other uses.” The suit claimed Florida’s restriction on Medicaid payments for Neurontin and its generic version violated federal law. Kodsi claimed AHCA’s attempt to restrict coverage was a cost-saving measure made at a time when many states are struggling to pay rising prescription drug costs. “This was money-driven,” he said. “The state argued that they were trying to protect the patient, but the only way to receive this medication was with a prescription from a physician. So who was the state protecting the patients from, their own doctors?” The parties agreed to allow the late U.S. Magistrate Judge Theodore Klein to decide the case rather than having it go to a district judge. In February 2006, Klein ruled AHCA violated federal law by barring most of the non-FDA-approved uses of Neurontin and its generic counterpart gabapentin. Kodsi said the ruling was an important precedent for two reasons. “When the state tried to do this, the fear was that other states who were in a financial crunch would look at what Florida was doing and try to copy it, potentially affecting Medicaid beneficiaries who really need this drug all across the country,” he said. “The other reason why I feel this was a strong precedent is because Magistrate Judge Klein’s opinion was one of the most well-researched, well-written opinions I’ve ever seen in my career.” The state withdrew its appeal to the 11th U.S. Circuit Court of Appeals in June.