DISTRIBUTION OF ESCHERICHIA
COLI
RESISTANT
FLUOROQUINOLONES, SULFAMETHOXAZOLE AND TETRACYCLINE IN THE CHAO
PHRAYA RIVER AND ITS TRIBUTARIES
Honda R1, Watanabe T2, Masago Y3, Chulasak R4, Tanong K5, Tushara CGG1, Sawaittayothin V4,
Chiemchaisri C5, Furumai H6.
1Environmental Science Center, The University of Tokyo, Japan
2Department of Food, Life and Environmental Sciences, Faculty of Agriculture, Yamagata University,
Japan
3Department of Civil and Environmental Engineering, Tohoku University, Japan
4Environment Research and Training Center, Department of Environmental Quality Promotion,
Thailand
5Department of Environmental Engineering, Faculty of Engineering, Kasetsart University, Thailand
6Research Center for Water Environment Technology, School of Engineering, The University of
Tokyo, Japan
Aims
Wide distribution of pharmaceutical and personal care products (PPCPs) is being reported in urban
water systems in the world. Increase in consumption of PPCPs expectedly affects water environment
in Thailand as well. One of the subsequent concerns is occurrence of antibiotic-resistant bacteria in
water environment. However, there was limited number of studies on antibiotic-resistant bacteria
linked with antibiotic concentrations in water environment. Moreover, possibility in acquisition of
antibiotic resistance in water environment is still veiled. In this study, we surveyed spatial distribution
of E. coli resistant to fluoroquinolones (levofloxacin, norfloxacin and ofloxacin), sulfamethoxazole,
tetracycline, and concentrations of the antibiotics in the Chao Phraya River and its tributaries, in order
to clarify the origin of antibiotic resistances and their spreads in water environment.
Methods
Water samples were taken at 48 sites from the Chao Phraya River and its four tributaries of the Ping
River, the Wang River, the Yom River and the Nan River in Thailand. E. coli strains in selected 32
samples were isolated by Chromocult Coliform Agar. The isolates were cultivated in ST media
overnight and subsequently tested on sensitivity to 5 antibiotics: sulfamethoxazole, tetracycline,
levofloxacin, norfloxacin and ofloxacin by Kirby-Bauer (KB) disk diffusion test. Sulfamethoxazole,
tetracycline and two fluoroquinolone species: ciprofloxacin and norfloxacin in the 48 river water
samples were extracted by SPE cartridges and eluted with methanol before analysis by LC-MS/MS.
Results and Conclusions
Spatial distribution of antibiotic-resistant E. coli isolates
At 20 of 32 sites in the Chao Phraya River and tributaries, more than half of E. coli isolates were
resistant to at least one antibiotics tested (Figure 1). No significant trend was found on ratios of
resistant isolates from upstream to downstream. However, populated area possibly contributed to
increase in ratios of E.coli resistant to multiple antibiotics. Ratios of isolates with resistance to more
than 2 antibiotics were higher in the Chao Phraya River and at one site close to Chiang Mai city than
other places. Especially, ratios of isolates resistant to fluoroquinolones were high at sampling sites
close to populated area.
Of total 396 E. coli isolates, 56% were resistant to at least one antibiotic. Only 38% of the isolates
were sensitive to all tested antibiotics. Multiple resistances were found in 43% of the isolates, and
12% of the 396 isolates had resistance to all 5 antibiotics tested. Ratios of isolates with resistance to
sulfamethoxazole and tetracycline were higher than those to levofloxacin, norfloxacin and ofloxacin
(Table 1).
No significant correlation was found between concentrations of an antibiotic and ratios of isolates
resistant to the antibiotic. Ciprolfoxacin and sulfamethoxazole were distributed extensively in the
Chao Phraya River and tributaries. Norfloxacin was detected only at two sites in the Ping River.
Tetracycline was not detected at any sites.
Resistances to fluoroquinones
Resistance to the three fluoroquinolone antibiotics: levofloxacin, norfloxacin and ofloxacin had
significant correlation with over 0.87 of the correlation coefficients among each. This indicates a large
portion of resistant E. coli to these antibiotics had cross-resistance to fluoroquinolone group. Resistant
isolates to norfloxacin were extensively found at the sites except in the Nan River, while norfloxacin
was detected only at two sites in the Ping River. According to National Antimicrobial Resistance
Surveillance Center in Thailand, 51% of E. coli isolates in hospitals were resistant to norfloxacin.
Therefore, one of the possible sources of the resistant isolates to norfloxacin in our survey was
hospitals. Resistance to levofloxacin and ofloxacin was probably acquired as cross-resistance to
norfloxacin. Another possible reason of the occurrence is cross-resistance to ciprofloxacin, another
specie of fluoroquinolone. Ciprofloxacin was found at high concentrations in water samples from the
upstream part of the Chao Phraya River and its tributaries. If the isolates have resistance to
ciprofloxacin, they presumably have cross-resistance to norfloxacin, levofloxacin and ofloxacin.
Resistances to sulfamethoxazole and tetracycline
Resistant isolates to sulfamethoxazole and tetracycline were widely distributed in the target rivers.
Meanwhile, tetracycline was not detected at any site while sulfamethoxazole was detected at many
sites in the Chao Phraya River. However, resistance to sulfamethoxazole and tetracycline had
moderate correlation with 0.72 of the correlation coefficient. This is not probably due to cross-
resistance since the resistant mechanism of these two antibiotics differs. However, there was
statistically significant dependence on resistance to them. This implies the presence of conditions to
promote acquiring multiple resistances to the two antibiotics, such as transfer of a plasmid or
transposon with resistant genes to both tetracycline and the sulfa drug. The river sediments might
function as a reservoir of such genes. Tetracycline resistance genes, tet(M), tet(S) and tet(W), were
reported to be widely distributed in the Mekong River (Kobayashi et al. 2007; Suzuki et al. 2008).
Wide distribution of resistant isolates to the two antibiotics suggests the spread of the multiple-
resistance gene in the rivers.
References
Kobayashi, T., Suehiro, F., Cach Tuyen, B., and Suzuki, S. (2007) Distribution and diversity of
tetracycline resistance genes encoding ribosomal protection proteins in Mekong river sediments in Vietnam. FEMS microbiology ecology, 59(3), 729–737. Suzuki, S., Kobayashi, T., Suehiro, F., Tuyen, B. C., and Tana, T. S. (2008) High Occurrence Rate of Tetracycline (TC)-Resistant Bacteria and TC Resistance Genes Relates to Microbial Diversity in Sediment of Mekong River Main Waterway. Microbes and Environments, 23(2), 149-152. 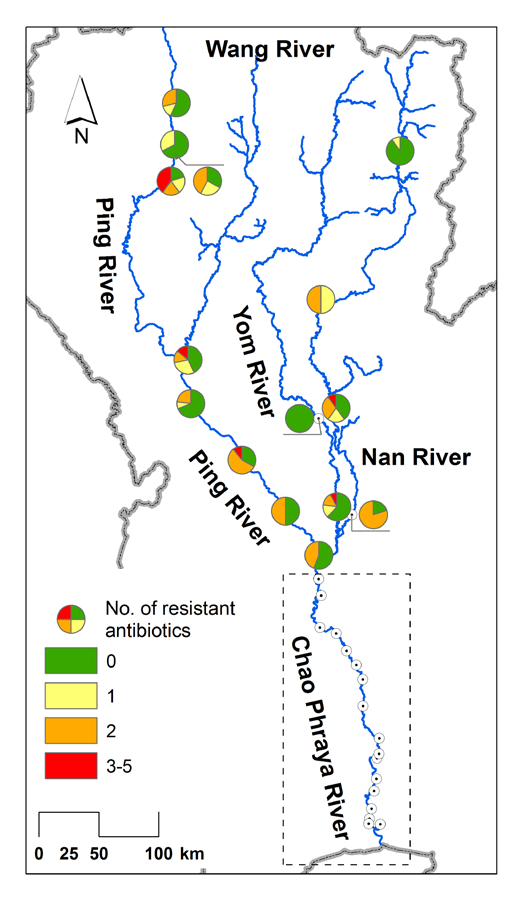 MDMA (Ecstasy, E, X, XTC, the Hug Drug) By Trinka Porrata They look so innocent---like Flintstone vitamins or sugar pills. Your five-year-old would pick them up and eat them, thinking them to be just candy. They come in all shapes and colors. MDMA (3, 4 methylenedioxymethamphetamine), also called Ecstasy, XTC, X, Versace, the hug drug, the love pill, and numerous other names reflecting the variou

Urologic Surgical Associates of Delaware PROSTATE HEALTH, BPH, and MALE VOIDING DYSFUNCTION WHAT IS THE PROSTATE AND WHERE IS IT LOCATED IN THE BODY? Only males have a prostate. It's a gland in the male reproductive system located just below the bladder, the organ that stores urine. The prostate surrounds a part of the urethra, the tube that carries urine from the bladder out through th