VOL. CLI.No. 52,171 Copyright The New York Times NEW YORK, SATURDAY, JULY 6, 2002 75 CENTS Free Prozac in the Junk Mail Draws a Lawsuit By ADAM LIPTAK
A Lilly spokeswoman said that sending “We are looking at these practices,ʼʼ Mr. unsolicited drugs through the mail was Newton said. “The office of the attorney FORT LAUDERDALE, Fla., July 3 -- The against company policy and inappropriate. general believes many of these practices unsolicited Prozac arrived in a hand-ad- “While Lilly supports informing people violate Florida unfair and deceptive prac- dressed manila envelope. It came from a about new treatment options and encourag- tices laws.ʼʼ Walgreens drugstore not far from here, ing them to discuss these options with their and there was a “Dear Patientʼʼ form letter doctor, what occurred in Florida appears to The Prozac mailing, he said, may have go beyond this,ʼʼ the spokeswoman, Debbie been unlawful for reasons unrelated to “Enclosed you will find a free one month trial of Prozac Weekly,ʼʼ it said. “Congratu- Experts in medical privacy have been “The safety concern is a legitimate con- lations on being one step to full recovery.ʼʼ critical of mailings of targeted marketing cern,ʼʼ he said, referring to the danger that materials based on information in patientsʼ the drugs would be found by children or The mailing infuriated one recipient, a pharmaceutical and medical records. They used inappropriately.
59-year-old home caregiver who filed a say the mailing of drugs is an unwelcome class-action lawsuit this week in state court innovation.
“Another concern,ʼʼ he said, “is, if she doesnʼt have a current prescription for “This is appalling in every possible way,ʼʼ Prozac, itʼs an illegal distributionʼʼ of a “Theyʼre going after me because I have a said David L. Pearle, a professor of medi- prescription drug. problem,ʼʼ said the caregiver, who agreed cine at Georgetown University. “Itʼs an to an interview in her lawyerʼs office here escalation of a deplorable practice.ʼʼ The form letter that accompanied the Pro- held. “It bothers me to think that somebody Joy Pritts, senior counsel at the Health Pri- representative for Lilly; it was signed by could get into my medical records and start vacy Project in Washington, said that “this the caregiverʼs doctor and two other local is one step beyond what we normally see.ʼʼ doctors.
On the other hand, Ms. Pritts continued, the The suit says Walgreens, a local hospital, Prozac mailing was part of “the increasing “We are very excited to be able to offer you three doctors and Eli Lilly, which makes trend for the commercialization of health a more convenient way to take your anti- Prozac, misused patientsʼ medical records care information.ʼʼ depressant medication,ʼʼ the letter said. “If and invaded their privacy. It also accused you wish to try Prozac Weekly, stop your the drugstore and Lilly of engaging in the “Itʼs being bought, sold and used like any antidepressant one day before starting Pro- other commodity,ʼʼ she said, referring to zac Weekly, then take Prozac Weekly once patientsʼ medical information. “This has a week thereafter.ʼʼ The plaintiffsʼ lawyers said they did not nothing to do with treating the patient. know how many people received the mail- This has everything to do with generating Stephen A. Sheller, a Philadelphia lawyer ings. “It could be anywhere from several profits.ʼʼ who also represents the plaintiffs in the dozen to several thousand,ʼʼ said Gary M. Aggressive marketing tactics, experts said, companies inclined to mail unsolicited are often linked to plummeting sales. Lil- samples.
The suit seeks an unspecified amount of lyʼs patent for Prozac expired last August, money and an injunction to prohibit further and the drugʼs sales have dropped more “What they should be doing is developing than 80 percent as generic equivalents have a drug to diminish their greed,ʼʼ Mr. Sheller become available. But Prozac Weekly is said. Legal experts said that sending drugs still under patent.
through the mail could be criminal if the The lawsuit says the lead plaintiff, the recipient does not have a prescription. How John Newton, a Florida assistant at orney gen- caregiver, identified only as S. K., has privacy law applies to medical records used eral, said that a whole range of pharmaceutical had a diagnosis of depression, “which she marketing practices was legal y problematic.
maintains in the strictest of confidence due 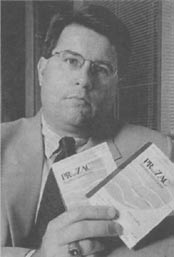 to potential public embarrassment and em- “If my grandchildren were there and they ployment repercussions.ʼʼ It says she did got a hold of this little package, they would “I hadnʼt been using Prozac for seven years Michael Polzin, a spokesman for Walgreen or better,ʼʼ she said in the interview. “It was a matter of a few months. It didnʼt agree “We received a valid prescription from the She was living in Massachusetts when she doctor,ʼʼ Mr. Polzin said. “All of the pre- tried the drug. She said her doctor here, scriptions in this program were faxed by doctorsʼ offices. It was our understanding that it was going out to people who are on Dr. Lambert, one of the doctors who signed the “Dear Patientʼʼ letter, is a defendant in the suit. She did not return calls for com- pharmacy for the samples. It is not clear whether the doctors who signed the letter tions to Holy Cross Hospital, which is also Mr. Polzin said that prescription drugs were A hospital spokeswoman said the hospital routinely sent through the mail and that the did not comment on matters in litigation. (Scott Fischer/South Florida Sun-Sentinel practice did not pose any safety hazard.
In early June, however, the hospital issued Gary M. Farmer Jr. represents plaintiffs in a statement to The Sun-Sentinel in South a suit over mailings.
“This particular effort,ʼʼ it said, “was the Dear Mr. Depressed: “It is inappropriate for Lilly sales person- result of well-intentioned, respected physi- nel to support programs in which medicine cians being given an opportunity to arrange is mailed to patients without the patientʼs for some of their patients to receive sample medications, at no cost, through proper, “Itʼs highly unethical,ʼʼ he said, “because “We understand why people should be The plaintiff here said Dr. Lambert admit- itʼs clear that the letter is not an outgrowth concerned about receiving unsolicited pre- ted signing blank letterhead, which the of the doctorʼs relationship with the pa- scriptions in the mail. To the extent Lilly Lilly representative added text to and de- tient.ʼʼ program, Lilly apologizes to those patients The plaintiff said the packaging that Lilly affected by it.ʼʼ Whether or not Dr. Lambert reviewed the uses for the samples worried her, too. letter before signing, Dr. Pearle said, the “They were very attractive because they had little beads inside a capsule,ʼʼ she said.

All about alliWeight-loss drug alli was launched in Ireland earlier this year and is sold without prescription inpharmacies. Consumer Choice questions the wisdom of this decision. Earlier this year a licence was granted towith dieting, its side effects are milderand the package leaflet and the label willfat. Alli should only be used by adults ofMedicines Agency’s (EMEA, see Useful suppl