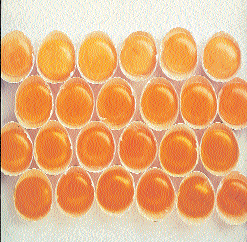 Detecting residues of veterinary drugs in eggsWhen laying hens are given veterinary drugs, residues willalmost inevitably appear in the eggs. The compartmental separation of residues between yolk and white appears todepend on the structure and lipid solubility of the drug,the dose and extent of exposure.
By Cornelis A. Kan1 and Michael Petz2, ID, Lelystad, The Netherlands1, University ofWuppertal, Germany.2 Veterinary drugs and coccidiostats are diate phase of growth. This can water or feed, or reaching them accidentally e.g. from cross-contamination in the feed mill. Some drugs are designed to work sys- temically; thus they must cross the intestin- al wall in order to exert their function.
Other drugs – and certainly the coccidio- stats – should exert their action within the gastro-intestinal tract, but nevertheless are and coccidiostats possess certain lipophilic properties in order to interact with and pass right until the moment of ovulation if there through membranes, so naturally some will from white and yolk depends heavily on the cross the intestinal barrier. These lipophilic plasma levels of the drug tested. Drugs that properties are a prerequisite to reach target clear rapidly from the body also disappear organs or cells and to fulfil their task of eli- part of the oviduct called the magnum.
from egg white in about 2-3 days after ces- minating micro-organisms or coccidia.
sation of exposure. Disappearance of drugs and deposition of egg white around the yolk from yolk generally takes about 10 days. By whole body. In the laying hen this includes med in the next hour or so and finally the taken up during the rapid growth phase of the ovary with growing follicles forming the deposition of the (calciumcarbonate) eggs- the yolk have been excreted with the eggs.
yolk, and the oviduct, where the egg white However, if the exposure level is very high is formed and secreted. The amount of the and the detection limit for the drug tested very low, residues deposited in the yolks, deposited in each tissue depends on their lower than they are today. Therefore, the growth, will also be detectable. This can case of eggs, the pattern of appearance of explain the fact, chloramphenicol residues drug residues will be influenced by the for- remain in eggs until 70 days after administ- ration. On the other hand, if the sensitivity Due to the physiological processes outlined of the method is very low compared to the above, the pharmacokinetics of drug resi- detected at all or only during a very short teins) are formed in the liver, and transpor- common features. Residues of drugs appear ted via the blood to the ovary. The yolk itself first in egg white, where they reflect plasma is deposited as a developing follicle, which levels. The time required to achieve con- is then ovulated once the follicle is fully stant levels in plasma and hence white is residues has been disputed. It appears that developed. The ovary of hens in active pro- generally 2-3 days. Residues in yolk reflect the extent of exposure, as well as the char- duction contains three types of follicles acteristics of the drugs themselves are the where the yolk can be deposited. Initially, their rapid growth, thus depending on the length and timing of the exposure relative Triggered by the observation that residues follicles, which are also known as white fol- to yolk growth, levels in yolk can increase, of the quite lipophilic doxycycline showed licles, as they contain no carotenoids. Once higher residues in egg white than in the (fat maturity is reached, these follicles begin to about 8-10 days is necessary for yolk levels rich) yolk, a systematic study with 11 diffe- rent sulfonamides was carried out (Kan & towards a drug might be sufficient to detect even years, before they begin to develop.
the drug in either egg white or yolk, depen- Once yolk formation has been initiated in a ding on the characteristics of the drug and and lipophilicity and measured distribution follicle, they are said to be in the interme- in residues between egg white and yolk and WORLD POULTRY-Elsevier Volume 17, No 2. '01

Table 1. The appearance of drug residues in egg yolk and white does not appear to follow any
obvious pattern. Data obtained from a range of sources.
those pH values. This indicates that the pKavalues used in the calculations were about Binding of residues of drugs and their met- abolites to protein might explain the obser- ved distribution of oxolinic acid, enrofloxa- and yolk. Protein binding of three sulfo- measured in plasma and egg white both in vitro and in vivo. Sulfadimidine had the lowest binding percentage (10 %) and sulfa- quinoxaline the highest (50 % in egg white).
The ratio of residues in egg white and yolk (Table 1). We also determined in vivo pro- tein binding in egg white of five sulfonami- des. Sulfachlorpyrazine and sulfadimethoxi- 30 % and sulfaguanidine of about 10 %. The values for sulfadimidine were quite variable values, which shows that the methodologyused should be considered carefully.
Riberzani et al (1993) suggested that the white than in yolk might be caused by the high solubility of the ‘acid’ drug flumequin in the basic matrix egg white. Roudaut(1998) studying the related compound oxo-linic acid also considered this a possibilityto explain higher levels of both oxolinic acid can not be explained in this way. The diffe- and sulfadimidine in egg white than in yolk.
rent ratios of sulphonamide residues found Diffusion from yolk to white during stora- correlate the observations. A few examples in egg white and yolk do not correlate with ge was ruled out by Roudaut (1998) as eggs are shown in Table 1, and no obvious corre- where separated immediately after laying.
an organic phase and a water phase at eit- her pH 6.0 (egg yolk) or 7.6 (egg white).
However, Gorla et al. ( 1997) consider the possibility that differences in liposolubility due to a different chemical structure may of drugs between yolk and egg white during both egg white and yolk and with the possi- alter intracellular penetration, thus explai- egg formation – especially during the 18 ble exception of sulfaguanidine levels in egg ning the patterns of distribution they obser- hours of shell deposition at a body tempe- white are at least equal to those in yolk, but rature of 41˚C – can however not be ruled often they are (much) higher. Tetracyclines between yolk and egg white. As ciprofloxa- out. Nevertheless Gorla et al (1997), consi- as a group show a more divergent picture.
der diffusion a possibility to explain the Remarkably the very lipophilic ones (doxy- more water-soluble) their observation that cycline and minocyclin) show higher levels ciprofloxacin is predominantly present in in egg white than in (the fat rich) yolk. The yolk, an observation which does not concur residues of oxolinic acid in egg white much enrofloxacin also show much higher residu- ger than in yolk. This does not match the theory that the levels in egg white are a and nitrofuranes show diverging patterns of ments with different pH values according to reflection of levels in plasma. Van Leeuwen distribution, but in all instances levels in their pKa values has been established for a and van Gend (1989) observed that levels of egg white are substantial. Some compounds longer in egg white than in yolk. The results lium, decoquinate, dinitolmide, and iver- However, no correlation was found between of these two studies suggest that quinolo- mectine show very low levels in egg white.
nes might have special characteristics in ratio) for 11 sulphonamide drugs (Kan and Lipid solubility certainly influences drug measured distributions of the sulfonamides A list of references is available on request. deposition in the (fat rich) yolk, but higher ses at pH 6.0 and 7.6, did correlate well with appearing in white than in yolk (Table 1) the calculated distribution of the unionised WORLD POULTRY-Elsevier Volume 17, No 2. '01

1 Acute Promyelocytic Leukaemia 1.33 AIDA – Clinical Trial AML17 Indication Induction and Consolidation of APL – Arm A of AML 17 Clinical Trial Pre-treatment Evaluation Morphology of blood and bone marrow aspirate. Trephine biopsy and ‘roll preparations’ should be made if the aspirate is difficult 6ml bone marrow or 30ml peripheral blood in EDTA to be collected from tr

Human rights considerations with regard to pandemic influenza The last decade has seen a number of major health scares around potential outbreaks of some form of pandemic influenza. The development of responses to HIV/ AIDS established new standards in the way people were treated, including confidentiality, informed consent to testing and so on. Older, more coercive public health