Impacto de los Programas de Desparasitación sobre las Helmintiasis Intestinales
Ponente:
Dr. José Luis Valdespino
WHO/CTD/SIP/96.2
ENGLISH ONLY
DISTR.: LIMITED
REPORT OF THE WHO INFORMAL CONSULTATION ON THE USE OF
CHEMOTHERAPY FOR THE CONTROL OF MORBIDITY DUE TO SOIL-TRANSMITTED
NEMATODES IN HUMANS GENEVA
29 April to 1 May 1996
Schistosomiasis and Intestinal Parasites Unit
Division of Control of Tropical Diseases
This Consultation was financially supported by:
Direzione Generale Cooperazione allo Sviluppo
Italian Ministry of Foreign Affairs

Since 1993, the National Health System in Mexico has organized periodical health campaigns, known as "National Health Weeks" (Semana National de Salud) which
promote various interventions focused mainly on children, including distribution of oral
rehydration packages, training of mothers in diarrhea treatment, administration of
megadoses of vitamin A and EPI vaccinations. Identification of the public health
importance of infection by soil-transmitted nematodes in Mexico and the availability of low
toxicity drugs which can be administered in a single dose, led to the inclusion of mass
anthelminthic chemotherapy (albendazole) in National Health Weeks.
5.5.1 Objectives of the intervention
The principle aims and expected outcomes of the programme have been:
To provide anthelminthic chemotherapy for 95% of children aged 2 to 14 years in municipalities with high risk of intestinal infections. To reduce the frequency of severe complications, including mortality associated with soil- To decrease the harmful impact of nematode infections on the growth, development and To decrease the egg output from soil-transmitted nematodes among groups with highest To decrease the prevalence of infection among school age children living in specific areas (municipalities with high risk of intestinal nematode infections). To decrease the reinfection rates among school-age children living in areas receiving

The target groups for administration of albendazole were children from 5 to 14 years (weeks 1st and 2nd) and from 2 to 4 years (weeks 3rd, 4rd, and 5th) (approx. ten
million children in total). A single dose of albendazole (400 mg), either tablets (5-14 yrs) or
suspension (2-4 yrs), was administered every four months (October 1993, February 1994,
June 1994, October 1994 and February 1995). Albendazole was purchased by the Ministry
of Health through a consolidated contract at a cost of 11 US$ cents per treatment

5.5.4 Surveys and Evaluation
Study sites were selected for survey and evaluation from each of the 21 states that participated in this programme. A questionnaire was designed to record information on
geographic and demographic variables of the community (climate, altitude, latitude,
population size, literacy, characteristics of households, availability of piped water).
Communities were stratified according to the degree of risk of infection (high, moderate
and low). Evaluation of the intervention was accomplished through sentinel stool surveys
from a sample of the population before and after each drug administration. Sentinel
surveys are not fully representative of the total population, but offer information on groups
and sites of interest.

5.5.5 Results
Baseline data were obtained from 9,337 children with stools being examined by the Kato-Katz method. The results showed prevalences for A. lumbricoides of 20.9% (range 0-84.9%), for T. trichiura of 17.4% (range of 0 to 85.8%) and for hookworm of 0.9% (range 0 to 8.87%). Prevalences of single and multiple helminthiases were found to be associated with climate,latitude and altitude; the risk increased 17 times for residents in tropical locations below 500 m altitude and 16 to 20 degrees North. During the five weeks, over 50 million doses of albendazole were administered and adverse effects due to the administration of the drug were minimal. Prevalences of soil-
transmitted before and after treatment for each“National Health Week” are shown in Table
1 and 2. 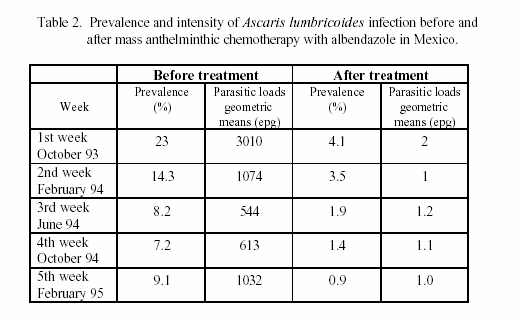 5.5.6 Merits
The evaluation demonstrated that mass administration of albendazole to children 2 to 14 years old living in high risk municipalities produced a satisfactory CR of (83% to 93%). A decrease in infection intensity (99.9% counts epg) and cure of moderate and severe cases (92% to 93%) were observed with efficacy having a cumulative effect. Overall, infection with T. trichiura was the least responsive to treatment with a single dose of albendazole. From the perspective of individuals, subjects have rapid clinical improvement in health and well being coupled with a decrease in demand of health services due to soil-transmitted nematodes. It is expected that the nutritional status and school performance of individuals will have improved. From the community perspective there is an increase in interest and support for other national health programmes. As part of its preventive services, the Mexican Ministry of Health has included in its National Health Program (1996-2000) the administration of mass anthelminthic chemotherapy for soil-transmitted nematodes to children living in high risk areas.