MICROBIOLOGY:
Triple-Threat Microbe Gained Powers From Another
Bug
Dan Ferber
Science 2003: 302
The long-dreaded superbug surfaced on a summer Friday in 2002. The new strain of Staphylococcus aureus, cultured from foot ulcers on a diabetes patient in a Detroit dialysis center, had developed resistance to vancomycin, one of the few antibiotics left that reliably kills staph. Doctors rushed the strain to the Centers for Disease Control and Prevention in Atlanta, and nine local and CDC public health officials scoured the dialysis center and tested more than 300 people the patient had come in contact with, collecting samples to see if it had spread. It hadn't. "We dodged another bullet," says clinical microbiologist Donald Low of the University of Toronto. Now a study on page 1569 shows how the microbe became a menace. Microbiologists Linda Weigel and Fred Tenover of CDC and colleagues found that the bug likely acquired the vancomycin-resistance trait from another microbe common in hospital settings, a dangerous alliance that health officials had long feared. The new S. aureus strain also resisted most common antibiotics, including penicillin, methicillin, and ciprofloxacin, and it possessed the genetic machinery to pass drug resistance on to drug-susceptible S. aureus strains. S. aureus commonly lives on the skin and in the noses of healthy people, causing nothing worse than pimples and boils. But in hospitalized patients, it causes tens of thousands of infections each year, including serious and sometimes fatal surgical-wound infections, bloodstream infections, and pneumonia. Penicillin saved many patients, but the microbe soon learned to evade it, and over the past half-century it has developed resistance to one antibiotic after another. By the late 1980s, vancomycin was the "drug of last resort" for multidrug-resistant strains, Tenover says. In 1992 researchers showed that a vancomycin-resistant strain of Enterococcus faecalis, which also infects hospitalized patients, could transfer its resistance genes to S. aureus on the skin of a mouse. "We began to anticipate that at some point we'd see high-level resistance moving into S. aureus," Tenover says. Dangerous liaison. Vancomycin resistance probably jumped from E. faecalis to S.
aureus via a plasmid (black loop) carrying a transposon (red) that then infested the
resident plasmid (blue). 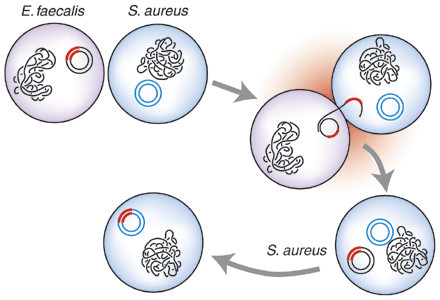 ILLUSTRATION: C. SLAYDEN/SCIENCE; SOURCE: LINDA WEIGEL When the Detroit vancomycin-resistant S. aureus (VRSA) strain appeared, the detective work began. Doctors isolated two strains from the patient. One resisted almost all available antibiotics. The other, from the woman's foot ulcer, resisted the same drugs plus vancomycin. Doctors also cultured vancomycin- resistant E. faecalis from her foot ulcers. The two S. aureus strains were otherwise identical to each other and similar to a menacing S. aureus strain that commonly infects hospital patients. Circular loops of DNA called plasmids from the VRSA and E. faecalis strains, but not the susceptible S. aureus strain, had a gene called vanA that wards off vancomycin. That suggested that the drug-resistance gene had jumped species, Weigel says. To see how it made the jump, the researchers checked the plasmids for a mobile genetic element called a transposon, a snippet of DNA that can jump out of one plasmid and worm its way into another. As has been found in other vancomycin-resistant E. faecalis strains, this one hosted a plasmid with a transposon containing vanA. The transposon appeared in a plasmid in the new VRSA strain as well. Colleagues at The Institute for Genomic Research in Rockville, Maryland, sequenced the entire VRSA plasmid, showing that the transposon was intact and ready to jump. Together, the results suggest that E. faecalis in the woman's ulcer sidled up to S. aureus and passed along its resistance plasmid. Enzymes in S. aureus seem to have destroyed the foreign E. faecalis plasmid, but before that happened, the transposon jumped, like a rat escaping a sinking ship, and infiltrated the S. aureus's resident plasmid to create a new hybrid. That created a nasty new S. aureus strain that can spread readily in hospitals, resist almost all the drugs available to kill it, and share its weapons with S. aureus cousins that remain vulnerable to vancomycin. "What we've isolated is really the triple threat," Tenover says. In the clinic, says Low, "it's critical for laboratories to be on the lookout" for new VRSA strains and for doctors to work to keep them in check. Two antibiotics, linezolid (Zyvox) and quinupristin/dalfopristin (Synercid), still stop VRSA, but it's important that drug companies step up efforts to develop alternatives, he says: "Right now we've got something in our back pocket, but that could change rapidly."
Genetic Analysis of a High-Level Vancomycin-Resistant Isolate of Staphylococcus
aureus
Linda M. Weigel, Don B. Clewell, Steven R. Gill, Nancye C. Clark, Linda K. McDougal,
Susan E. Flannagan, James F. Kolonay, Jyoti Shetty, George E. Killgore, and Fred C.
Tenover Science 2003 302: 1569-1571.

Your feedback is important to us. email us your feedback. Digestive Health SmartBrief April 5, 2013 Patient Perspectives Patient's perspective "We can all agree that inflammatory bowel disease is an isolating and painful disease. Unfortunately, many people don’t want to talk about it because there is a ton of stigmaattached to one of the most prevalent symptoms of Crohn’s and